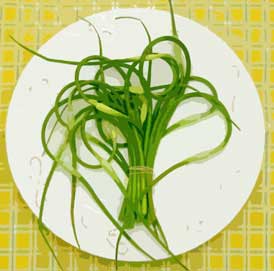 t was a snail that introduced me to garlic. My mother was from England and my father was from Slovakia so spice and punch came in the form of mustard, black pepper or sauerkraut. Olives, capers and anchovies never appeared on our table. When I was nineteen, I moved to an apartment on the second floor of a converted town house in Washington, DC. The French Market, a boutique grocery store, was on the ground floor. It had become a successful business when John Kennedy was president and all things French became fashionable. By my third visit, I realized that my gastronomic education had begun.

The owner, Georges, was from Nice, in the south of France. He always had time to answer questions, share recipes or offer tastes. He never looked at his twelve-inch chef’s knife as he minced garlic, parsley and almonds to make snail butter and gossiped with market regulars. After he put a cooked snail into each shell he sealed the opening with a knob of the seasoned butter. When he suggested that I try the snails for dinner, I bought a dozen, a baguette and two sets of snail-eating equipment. He explained how to heat the snails in dimpled metal plates and how to use the tool that looked an eyelash curler to hold the hot shell while fishing them out with a small snail fork.

The snails were interesting, a bit chewy, but the apartment smelled wonderful! The chunks of bread soaked in the hot garlic butter were divine. It was the beginning of a new friendship, ‘Bonjour Garlic!”

Since that introduction, garlic has been a permanent resident in my pantry. It appears so frequently in my recipes that I use garlic scapes, the immature flower stalks of hard neck garlic, as my logo. The best way to store garlic is at room temperature, in a porous container. I have a ceramic garlic pot with a lid that keeps out the light and holes in the sides that allow air to circulate, preventing garlic from becoming moldy.

Georges showed me how to add zip to salads by rubbing the inside of a wooden salad bowl with a clove of garlic and a pinch of kosher salt. Occasionally, he had cooked artichokes next to mushroom, fennel and green bean salads. A small container of mayonnaise mixed with mince garlic, lemon juice, a pinch of cayenne pepper and an artichoke made a lunch that was tres chic.

The pate Georges made was perfumed with garlic and it inspired me to use garlic to season meatloaf. When Georges prepared chickens for roasting, he pushed a mixture of butter, garlic and thyme under the skin of the bird. He seasoned legs of lamb with garlic, rosemary, sage and thyme before deftly forming each roast into the shape of a duck with the end of a bone as the duck’s head. I’ve never tried the fancy butchering but I do use the same herb and garlic mixture to season lamb.

I don’t remember who introduced me to the complex, sweet and earthy flavors of roasted garlic. I make it often by cutting off the top of plump garlic bulbs, drizzling them with olive oil, wrapping the bottoms of the bulbs in aluminum foil and roasting them. After half an hour in a 350-degree oven, the golden paste can be spread onto crusty bread to make appetizers that I serve with red wine.

Fifteen years later, my friend Gwen served a salad made with blanched garlic. She said that it was easier to digest and that it added flavor with less bite. She claimed that blanching eliminated volatile sulfur compounds that cause garlic breath and indigestion. Gwen simmered garlic in boiling water for a minute before peeling it and blending into salad dressing. Blanching garlic in the microwave by zapping unpeeled garlic cloves in a half-cup of water in a partially covered container for 30 seconds seems simpler to me. I use blanched garlic in barley or bean salads that will not be served within and hour.

Garlic is called the stinky rose and blamed for causing bad breath but its presence is recognized in cuisines around the world as the promise of a tasty meal. The pan of garlic roasted root vegetables I served on Saturday delivered on that promise when Jim and Anne joined us for dinner.

Along with the roasted turnips, carrots and potatoes roasted, a can of cranberry sauce mixed with a couple of tablespoons of horseradish and a roasted chicken from the market were all I needed for our impromptu dinner party. The scent of the roasting vegetables made it seem as if I had spent the entire day, rather than half an hour, cooking. I started the vegetables in the microwave and they finished roasting while I set the table, and cut up the chicken. Here’s how I did it.

I peeled four carrots and cut them into two-inch lengths. I cut four medium, peeled turnips and four medium, unpeeled red-skinned potatoes in half. I put all of the vegetables into a shallow ceramic baking dish added a tablespoon of water, covered the dish with waxed paper and zapped them for four minutes, on high, in the microwave.

I stirred in two tablespoons of olive oil, two tablespoons of unsalted butter, twelve large unpeeled garlic cloves, and generous pinches of dried thyme, kosher salt and black pepper. The garlic will burn if the papery skin is removed.

After thirty minutes, in a 375-degree oven, the vegetables were tender, golden and ready to serve. I stirred them twice as they cooked. Dinner was so easy that I had enough energy to enjoy both the conversation and the dinner.