Is there a better combination than pork and apple? Doubtful. Is there anything better than a Bonfire Night picnic? Not a chance. As pleasing as a Catherine Wheel and much less likely to spiral out of control like the ones in Harry Potter, Sainsbury’s easy-to-make sausage rolls provide a twist on a classic. 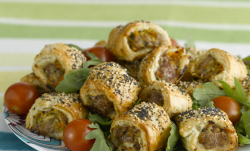 Still hungry? Check out these other Sainsbury’s recipes: