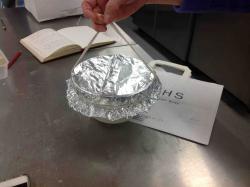 Makes one pudding for a two-pint pudding basin

Next day (perhaps on Stir up Sunday):

Feeding the pudding throughout the year: