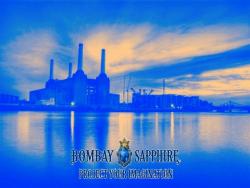 Last December, Bombay Sapphire launched a competition among its fans, asking them to use their imaginations to create a concept that could be turned into a three-dimensional projection. Submissions for Project Your Imagination came in from around the world and Bombay Sapphire turned to Facebook fans to decide which of the shortlisted concepts should win.

They chose the concept by Erjola Veliaj, from Albania – and now it’s our chance to see it. Based on the famous Rubik’s Cube, the winning concept will be projected onto London’s iconic Battersea Power Station which will dazzle in a rainbow of changing colours echoing those of the puzzle.

This being a Bombay Sapphire event, cool blue will also feature – projecting from inside the power station and reflecting onto the Thames.

The spectacle doesn’t end there. The whole thing will be seen from one of the Thames’s luxuriously sleek cruise ships – the Silver Sturgeon – as part of an extraordinary evening that will include creative, molecular cocktails (sounds to me like one of Heston Blumenthal’s tricks), fantastical food (ditto), a re-imagined photo booth (no good for passports), an intriguing competition (stay sober enough to take part) and a mixology goody bag (who can resist?). And it will all be accompanied by a live DJ session.

If you are free during the evening of Wednesday, 8th June and fancy sailing from The Savoy Pier to Battersea and back, and trying the Bombay Sapphire twist on a Collins that has been created for this evening, apply for complimentary tickets for you and up to three friends at bombay.sapphire@hillandknowlton.com

You can also become a fan of Bombay Sapphire and see the winning submission on Facebook: www.facebook.com/bombaysapphire