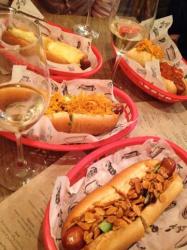 With every World Cup come the inevitable tie-ins: Wayne Rooney stars in the new Nike advert; Joe Hart is on the Head and Shoulders; and Daniel Sturridge is representing that well known footballer’s hang-out, Subway. While I’d hesitate to recommend heading down to Subway for the Sturridge Special, there are some more enticing things appearing on restaurant menus over the coming weeks.

One such offering is the World Dogs menu at Bubbledogs, the unlikely champagne and hot dogs restaurant in Fitzrovia. Taking the competing nations as inspiration, Bubbledogs have created a limited edition menu of special dogs that represent those teams. When you’re dealing with a sausage in a bun, the opportunities to go wild on toppings are almost limitless and some of the more ‘out there’ creations include the Breakie Dog for England – crispy bacon, tomato relish, black pudding bits and a whole fried egg and The Junya for Japan – teriyaki stir-fried noodles, nori and toasted sesame seeds.

Resisting a patriotic surge for the Breakie Dog, I started with a Greek Stavros Ã¢â‚¬â€œ aubergine, feta and red onion Ã¢â‚¬â€œ before bringing on the Mexican Jose Ã¢â‚¬â€œ pickled jalapeÃƒÂ±os, salsa, avocado and sour cream. Both made an excellent impression, assisted greatly by some crisp, golden tater tots, sweet potato fries and a few glasses of bubbles.

If you want to start picking your team, here’s the menu in full:

The limited edition Word Cup hot dog menu at Bubbledogs is available from now until the end of the World Cup at both lunch and dinner.