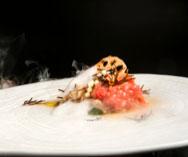 From 11th June, The Club at CafÃƒÂ© Royal will launch the next in the series of’The Domino Effect’, with chef Aurelio Morales of Ramses restaurant in Madrid. Aurelio, an alumni of Ferran AdriÃƒÂ ‘s El Bulli, belongs to a new generation of talent in molecular gastronomy, so guests can expect a few spectacular surprises.

The series of international guest chef collaborations has previously seen two-Michelin starred Spanish chef, Paco Roncero work alongside executive chef Andrew Turner to create an exclusive dining experience. After the overwhelming response to Paco’s residency, The Domino Effect is back to offer diners a one-off chance to sample Aurelio Morales’ cooking for the first time ever in London. 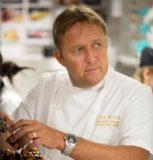 Guests will also be able to enjoya paired wine flight as well as a specially created Champagne cocktail, made by The Club’s mixologist, Tiziano Tasso, in collaboration with Veuve Clicquot Rich. The Richer cocktail (Veuve Clicquot Rich, Belvedere Pure and oolong Orange Blossom cordial),will accompany the snacks. The menu will be priced from £85, with paired wines and cocktails at an additional cost of £50. 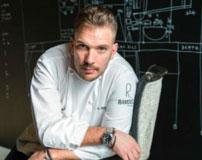 Aurelio Morales is head chef of celebrated restaurant Ramses in Madrid, where his avant-garde and minimalist-style of cooking is spread across five different spaces; Room Delicatessen, Laterraza, Petit, Champagne Bar and Suria Ã¢â‚¬â€œ all of which have been designed by world-renowned designer Philippe Starck. Suria, which is Ramses’ gourmet restaurant and Morales’ main project, is also split into five unique dining spaces; Dior; Christine; Dom Perignon; Haima; and Black.

Having worked alongside culinary greats such as Ferran AdriÃƒÂ  at El Bulli, and Paco Perez at Miramar, Aurelio, who is aged just 32, is a real upcoming star in molecular gastronomy. He has become known for his contemporary and sophisticated approach to cooking that highlights the quality yet simplicity of the ingredients.

A selection of English and Spanish cheeses (supplementary charge of £10)