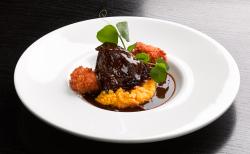 Chocolate came to Europe via sixteenth-century Spanish conquistadors, while the Romans valued Malbec, not for wine, but the blossom which attracted honey bees. These facts were recounted over a leisurely master-class held at the moodily-lit Cavas de Gaucho at their flagship Piccadilly restaurant, Swallow Street.

It worked well in conjunction with a matching session whereby Head Sommelier, Zack Charilaou looked at the art of Malbec and chocolate matching (for maximum 14 people at Gaucho Piccadilly, £30pp, 14-18 October).

In addition to the formal events and menu, all diners at Gaucho will receive complimentary Malbec-flavoured chocolates during Chocolate Week.