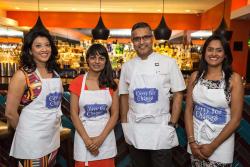 With the backing of heavyweight celebrity chefs, charity campaign Curry for Change celebrated its official launch at twice Michelin starred restaurant Benares.  The launch saw the charities’ ambassadors, key media, influencers and stakeholders unite to mark the start of the campaign which is aiming to raise over £50,000 to help rural families in Africa and Asia, including the recently struck country of Nepal, to fight hunger and poverty.

With a reported one in eight people around the world going to bed hungry each night, UK charity Find Your Feet created the Curry for Change campaign as an easy and fun way for the public to help make a real difference; by either’dining in’ and hosting their own curry night at home or’dining out’ and enjoying an Indian restaurant meal, and helping to raise vital funds.

Now in its fourth year, the campaign has garnered support from celebrity ambassadors including twice Michelin Starred Chef Atul Kochhar, TV Chef and Restauranteur, Cyrus Todiwala OBE, TV Chef and Cookery Writer Anjum Anand, and Founding Chef of The Cinnamon Club Vivek Singh, who are helping to raise awareness and valuable funds for the cause this year.

Running from June – October 2015, the campaign encourages people across the country, from curry enthusiasts’ to first time try-ers, to host an Indian-inspired dinner party using a free Curry for Change event pack.  By simply signing up at www.curryforchange.org.uk aspiring cooks can receive all the essentials to invite friends, family or co-workers for a spicy night in.  The kit includes exclusive recipes from campaign ambassadors, top cooking tips and a packet of Natco spices.  After guests have enjoyed their evening of fantastic food and great company they are invited to donate what they’d usually spend on a take-away and every penny raised will be matched by Natco.

In addition, throughout June, a number of partner restaurants across London, such the renowned Cinnamon Club and Benares, will also be creating special dishes in honour of Curry for Change or offering their guests the chance to make a donation with their bill.

Jessica Ridgewell, spokesperson for Find Your Feet, commented: Ã¢â‚¬Å“We are thrilled to launch Curry for Change for another year and get people up and down the country enjoying curry for a great cause.  Every penny raised enables us to help more vulnerable families change their situation for the better by being able to grow enough food, strengthen their voices to speak out against injustice and earn enough money so they can find their feet.  For example, just

£12 can provide a farming demonstration to a village in India so families can learn how to conserve water and grow more crops.

Ã¢â‚¬Å“This year we hope to raise more than ever and that’s where the great British public come in – simply sign up and enjoy an Indian feast with friends and family!Ã¢â‚¬Â

Talking about the campaign, Patron Atul Kochhar said: Ã¢â‚¬Å“I grew up in India and have seen poverty closely and know the difference a campaign like Curry for Change can make.  I’m addicted to this charity; it’s doing amazing work.  What is different is that they don’t just simply give money; they invest in the community so people learn the skills they need for a life without hunger.

Ã¢â‚¬Å“I’ve seen first-hand their passion and commitment to their work and the impact they have on the lives of poor people.  Raising £50,000 would be excellent Ã¢â‚¬â€œ but I say let’s aim high and raise as much as we possibly can!Ã¢â‚¬Â

For further information on the Curry for Change campaign and to sign up to receive your free kit please visit www.curryforchange.org.uk.