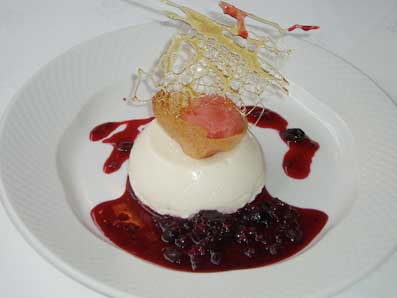 Elizabeth’s of Eastgate, Rochester’s historic French restaurant is to serve special menus dedicated to the English patron saint on 23rd April. Elizabeth’s was quoted in the novel Great Expectations by Charles Dickens, as the home of Uncle Pumblechuck. The 16th century Tudor building retains many original features.

The £30 dinner comprises a Toad in the Hole appetiser; Melon and Prawn starter; Lemon Sorbet; Traditional Roast Beef in a Madeira jus with roast potatoes and Yorkshire Pudding; with a Home Made Banoffee Pie pudding.

Quizzed as to the concept of a French celebration of St George’s Day, Elizabeth’s, French-born Head Chef: Yannick Fausse said, ‘Why not? I love England. I live in England,” adding, ‘But the best cuisine is French, but that’s not to say that it cannot help improved with addition with subtle influences of the best English, Italian and Spanish cooking.”

Fausse, who trained in his native Ardennes region of northern France, bordering Belgium, has working for leading restaurants and hotels in Canada, Dublin and London, including a spell with the Michelin-starred patron/chef Richard Corrigan.

Proprietor Manuel Mouzo commented: ‘Food is an international language and whilst most of ingredients are English, we bring to bear a fusion of modern European influences to an essentially classic French style.”