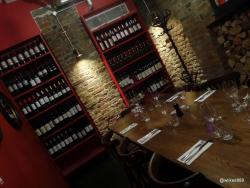 On 30th & 31st October, popular Argentine tapas restaurant Zoilo will launch a series of guest chef residencies. The sessions will see top chefs take over the kitchens for two days, highlighting the different cultural influences on Argentine cuisine. To kick off, Niclas Yngvesson and Gustav Knutsson, of Sweden’s Michelin-starred Bhoga, will create a menu featuring the best of their innovative Scandinavian cuisine, with an international twist.

Argentine cuisine is a fascinating mix of cultures and the result of a vibrant heritage and immigration history. The great immigration wave to Argentina took place in the 19th and early 20th century, with colonisation from Italian, Spanish, Swedish, Welsh, French and German immigrants, amongst others. Each residency at Zoilo will demonstrate how different cultures have shaped the country’s passion for food.

Commencing the series with Sweden, Zoilo will also stage takeovers from top Italian and Scandinavian chefs Diego Cardoso and Marcus Samuelsson, with more to be confirmed for 2015. Chef and co-owner, Diego Jacquet, will partner with each chef to enlighten Zoilo diners on the background behind Argentina’s varied and rich culinary history.

Award-winning Bhoga launched in Gothenburg in 2012 and received its first Michelin star earlier this year. Young chefs Niclas and Gustav (formerly of The French Laundry and The Fat Duck) have devised a menu which recognises Swedish influences on Argentine cuisine, whilst incorporating their innovative flair. The menu uses ingredients inherent in both Patagonian and Swedish cooking such as cured trout, juniper berries and cloudberries as well featuring beef as the main course, for which Argentina is universally renowned.

For the second residency, former head chef of Murano, Diego Cardoso fuses both Argentine and Italian ingredients and cooking techniques in dishes such as classic Argentine sweetbreads with celeriac and hazelnut puree with chimichurri dressing. The main course of lamb is served with a black pepper and watercress crÃƒÂ¨me fraiche and artichoke escabeche, traditionally a sour Mediterranean marinade that made its way over to Argentina with Italian immigrants and became a staple in the South American country.

Tickets will be priced at £39.95 per person, with the first two residencies seeing a full restaurant takeover.