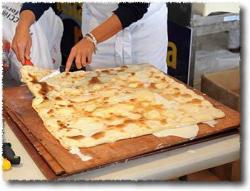 Until 8 October, Selfridges London has a taste of regional Italy with the exclusive launch of Focaccia col Formaggio di Recco the’poshest’ cheese sandwich this side of Italy’ by Crosta & Mollica.

Featuring two very soft sheets of light dough filled with a thin layer of the freshest and creamiest Stracchino cheese, baked until bubbling, Focaccia col Formaggio di Recco  is a firm favourite of Michael Winner who recently discovered it at the newly opened II Ristorante at the Bulgari Hotel, Knightsbridge – describing it as’a light pizza without the topping’.

Recco is the gastronomic capital of Liguria in Italy, renowned for its Ã¢â‚¬Å“focaccia col formaggioÃ¢â‚¬Â (focaccia with fresh, curd cheese).

This unique recipe, perfected by the focaccia makers in Recco for over hundreds of years, was already being eaten at the time of the Crusades and legend has it that the focaccia was first’invented’ by the people from Recco escaping from Saracen pirate invasions. Fleeing from the coast, they only took with them flour, olive oil and cheese and their only cooking utensils were slate slabs.

At the end of the 19th Century focaccia was sold in bakeries and in the very first inns, mainly on All Souls’ Day.  In 2005, the Focaccia Consortium of Recco was established.

Crosta & Mollica director, James Orr explains, Ã¢â‚¬Å“What better way to celebrate Selfridges Italian promotion than with this classic Italian dish. Crosta & Mollica is all about the real discovery of’really Italian’ bakery products Ã¢â‚¬â€œ the bakers, the process, the adding, the blending, the passion and the rituals.  All of our products are carefully sourced from authentic Italian bakers throughout Italy who each bring their very own distinctive approach and baking style to give us a taste of the real regional Italy.Ã¢â‚¬Â