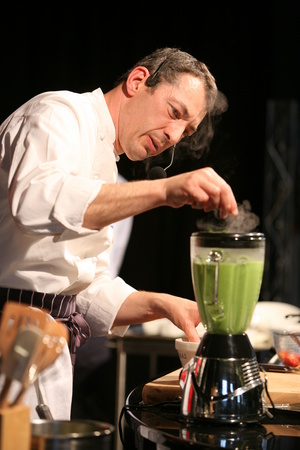 The final line up of chefs demonstrating at the 2009 Le Cordon Bleu Henley Food Festival on 16th & 17th May has been confirmed. Containing a mixture of local, national and international stars, boasting Michelin Stars, a vast range of TV appearances, books and talent to spare, this year’s crew is a mouth watering prospect.

Fan’s of TV’s Great British Menu, Saturday Kitchen, Market Kitchen, Return to Tuscany or Heaven’s Kitchen will be familiar with many of the star names. John Campbell, Daniel Galmiche, Atul Kochaar, Jason Atherton and Alan Murchison have all been seen on our screens recently. Mary Berry is one of the world’s best selling cookery writers while Paul Clerehugh, Tom Kerridge and Mike North represent the very best that can be found around Henley.

UKTV Food’s Market Kitchen have also confirmed that they will be coming to the festival on Saturday 16th May, with their own mini kitchen and popular winner of Jamie Oliver’s Fifteen in 2002, chef Aaron Craze. Who has just written a book called Aaron Cooks Italian.

Giancarlo Caldesi will be performing a double act with Italian TV charmer Gino d’Acampo on Sunday, while both will be found in Giancarlo’s ‘Caldesi A’Amici in Campagna” arena. And on both days game cook Mike Robinson will demonstrate all the skills needed to skin and cook fresh game.

Other highlights include a stupendous patisserie display by Julie Walsh of Le Cordon Bleu cookery school and the final of the amateur chef cook off challenge, judged by Mike Robinson and chef instructor Stuart Connibear from festival sponsor Le Cordon Bleu.

Festival organizer Chris Barber commented, ‘We are very excited about the quality of the chef demonstrators this year, as are the chefs themselves.” Chris who was personal chef to HRH Prince of Wales for 11 years went on to say, ‘Knowing many of the chefs as I do I am confident that we will be seeing cooking of the highest order in all its forms. I will be there to do the introductions but I would recommend that visitors get to the demonstration theatre early to ensure a good seat as all the demo’s are bound to be popular.”

The full line up plus more information about each of the demonstrators is below:

Saturday 16th May
11.00 Mary Berry
One of the UK’s best-known and respected cookery writers, a TV cook and Aga expert. Mary has written over 70 books selling over 50 million copies around the world. www.maryberry.co.uk

11.45 John Campbell
Possessor of two Michelin Stars for The Vineyard at Stockcross near Newbury. John combines complex elements into dishes that look and feel simple and natural. www.the-vineyard.co.uk

12.30 Phil Howard
Co-owner and chef at The Square in Mayfair where he holds two Michelin Stars. www.squarerestaurant.org

1.15 Mike Robinson
Renowned for his appearances in Heaven’s Kitchen the story of his pub the Pot Kiln, Mike is passionate about wild food and game. He also runs his own Game and Wild Food Cookery School. www.gamecookeryschool.co.uk

2.00 Daniel Galmiche
Charming Frenchman and Executive Head Chef at The Forbury in Reading he achieved a Michelin Star while chef at Harvey’s in Bristol. www.theforburyhotel.co.uk

2.45 Jason Atherton
The first British chef to complete a stage at Spain’s famous El Bulli restaurant he is Executive Chef at Gordon Ramsey’s Maze where he won a Michelin Star. In 2008 Jason won the starter and main course competition in the BBC’s Great British Menu. www.gordonramsay.com/maze

3.30 Atul Kochhar
Innovative Indian chef, revered for his masterful use of spicing and owner of a Michelin Star for his restaurant Benares. www.benaresrestaurant.com

4.15 Julie Walsh
From Le Cordon Bleu Cookery School, Julie is a master chef and expert in pâtisserie, she will be creating an Artisan Chocolate Centrepiece. www.cordonbleu.edu

5.45 Paul Clerehugh
Owner and chef of The Crooked Billet in Stoke Row, widely regarded as one of the best foodie pubs in the country, Paul also owns the London Street Brasserie in Reading. www.thecrookedbillet.co.uk

Sunday 17th May
11.00 John Campbell
Possessor of two Michelin Stars for The Vineyard at Stockcross near Newbury. John combines complex elements into dishes that look and feel simple and natural. www.the-vineyard.co.uk

11.45 Mike Robinson
Renowned for his appearances in Heaven’s Kitchen the story of his pub the Pot Kiln, Mike is passionate about wild food and game. He also runs his own Game and Wild Food Cookery School. www.gamecookeryschool.co.uk

2.00 Remy Joly
Head chef at myalacart, winner of Restaurant of the Year in the recent Pride of Reading awards, Remy specialises in seasonal British food. www.myalacarte.co.uk

2.45 Jerome Leopold
Jerome is head chef at The Castle Restaurant in Hurst where he combines an understanding of local and seasonal ingredients with a heap of Gallic charm. His menu’s are all about simplicity, value and seasonality. www.castlerestaurant.co.uk

3.30 Mike North
One of the youngest winners of a Michelin Star for The Goose in Britwell Salome, Mike is now chef proprietor at the Nut Tree Inn in Murcott near Oxford.

4.15 Tom Kerridge
Chef proprietor of the Michelin Star Hand & Flowers in Marlow, described by The Guardian as ‘…the epicentre of Marlow’s food revolution.” www.thehandandflowers.co.uk

These details are correct at time of writing but are subject to change.

Advance tickets and more information about the 2009 Le Cordon Bleu Henley Food Festival can be found at www.henleyfoodfestival.co.uk

By Foodepedia3 May 2009Restaurant News