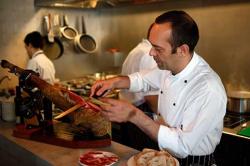 At this summer’s Hay Festival (23rd May Ã¢â‚¬â€œ 2nd June) visitors will find a rather unusual food emporium nestled amongst the books and crowds Ã¢â‚¬â€œ in the form of a pop up tapas bar hosted by JosÃƒÂ© Pizarro and created by the Spanish Tourist Office.

Tapas EspaÃƒÂ±a by JosÃƒÂ© Pizarro will offer a range of dishes from London’s Spanish chef, based on his menus at his popular Bermondsey Street bar JosÃƒÂ©.  Dishes have been designed to highlight the diversity of Spain’s many twists on traditional tapas.  Dishes will change on a daily basis depending on what looks good at market that morning, but typical dishes will include Gazpacho with Apples & Cockles, Empanadas, big, juicy Gordal olives stuffed with orange, Estofado (a sort of rustic stew), Grilled Squidand JosÃƒÂ©’s popular Lamb Chops.

Spain has long been known for its excellent cuisine ranging from its culinary constants such as jamÃƒÂ³n and olive oil to the pintxos of San SebastiÃƒÂ¡n, the paella of Valencia and the suckling pig of Segovia.  The basis of Spanish cuisine is good quality ingredients and simple home cooking, both key elements of JosÃƒÂ©’s cooking.

JosÃƒÂ© is keen to use as much local produce as possible in order to keep a check on the food miles.  Lamb will certainly come from Wales and he is also considering showcasing other locally produced food and drink such as Welsh Cider.

Wales shares a proportion of their ancestry with Northern Spain and even today, there are many parallels. With lush green and verdant scenery, the fertile soils in Wales and Northern Spain provide a wealth of fresh vegetables and happy grazing livestock, which twinned with an elongated coastline, provides an abundance of mouth-watering ingredients, suitably fitting for a Hay Festival pop-up.

In order to be true to his roots, JosÃƒÂ© has insisted that the wine list carries some of his best-loved sherries, cavas and wines, reining from Spanish regions including AndalucÃƒÂ­a, CataluÃƒÂ±a, Galicia and the Basque Country.