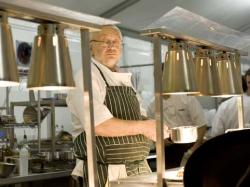 Legendry French chef Pierre Koffmann’s pop-up restaurant ‘Pierre Koffmann Restaurant on the Roof at Selfridges’ caused a great deal of excitement in the capital when it was open in October so Selfridges are now extending the restaurant for the third and final time, until 27th November this year.

Due to unprecedented demand, this ‘pop-up’ restaurant will open from Monday 2nd November to Friday 27th November 2009 with reservations available Mondays to Fridays for lunch and dinner, making it one of the most successful showcase events of 2009.

Since the pop-up opened some of the nation’s greatest chefs have visited the restaurant to try Pierre’s food, like Marco Pierre White, who considered “It was one of the most enjoyable meals he has had in years”. For the November openings Pierre Koffmann will be joined full time by Eric Chavot and Bruno Loubet.

Demand for tables at this pop-up has been amazing, Selfridges having received almost 10,000 calls and 8,000 emails requesting reservations. A mark of its popularity is that over 70 per cent of customers who attended in the first 15 days of the pop-up requested a second booking, which at the time Selfridges could not fulfil.

The original plan was for Koffmann and his team to cook in the ‘pop-up’ restaurant on the roof of iconic Selfridges for the six days for the inaugural London Restaurant Festival from the 8th-13th October. However, due to overwhelming demand, that date was extended by one week. Then, with demand showing no sign of dropping off, Koffmann surprised organisers by agreeing to give people ten days more of his fabulous cooking in what is one of the most talked-about culinary events of 2009.

To find out more visit www.selfridges.com