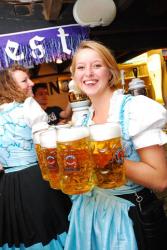 Why go to Munich to experience the famous Oktoberfest? For the sixth year in a row, the Bavarian Beerhouse in London is organising its own Oktoberfest, featuring Bavarian-style fun, entertainment and live music. It may well involve sausages!

Kicking off on Thursday, 17th September 2009, this is an authentic slice of Oktoberfest action in the heart of the capital. For seven weeks the Bavarian Beerhouse will be transformed into a haven of beer, live entertainment and partying.

You can win tickets to opening night here

Massive pork shanks and Stein glasses of German beers will be served by dirndl-clad waitresses. Guests will be encouraged to dance on the benches. Live musicians are flown in specially from Bavaria, bringing their guitars, accordions and Lederhosen. The band line-up is as follows

The Bavarian Beerhouse’s General Manager, Diana Lehmann said: ‘Everybody who’s been to the Oktoberfest in Munich tells me how much they loved it. Now they can celebrate Oktoberfest in London in an authentic Bavarian atmosphere. Partying Bavarian-style means people really letting their hair down and enjoying themselves.”