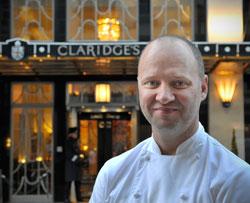 Simon Rogan’s Cumbrian restaurant L’Enclume was recently named Best Restaurant in the UK by the Good Food Guide 2014, and Restaurant of the Year at the 2013 Observer Food Monthly Awards. Now the acclaimed chef turns his attention to the capital, where he will head the as-yet-unnamed new restaurant at Claridge’s.

Born in Southampton, Rogan has previously worked with star chefs including Marco Pierre White and Jean-Christophe Novelli. His two Michelin star L’Enclume was opened in Cartmel, Cumbria in 2002, and focuses on indigenous produce, which he sources from his own farm. The star chef, who is known for his inventiveness and creativity, will use his love of home-grown and fresh produce to take dining at Claridge’s in an exciting new direction. 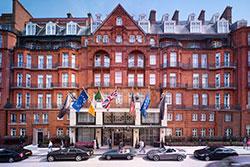 Commenting on the news, Rogan says Ã¢â‚¬Å“I have long been looking for a permanent London home and in Claridge’s I feel we have found a true partnership of creativity and world-class excellence. My team and I are looking forward to the challenge of marrying my culinary style with the phenomenal heritage of Claridge’s Ã¢â‚¬â€œ this is a massive honour and we are focused and determined to create a truly outstanding restaurant.Ã¢â‚¬Â