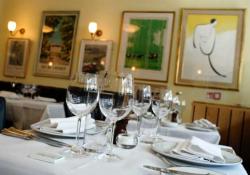 Bellamy’s Restaurant, the French brasserie on Bruton Place in Mayfair, is holding a cabaret week until Saturday 23rd August.

These evenings, called’Some Like It Hot’, will feature the return to the restaurant of actress and singer Rebecca Grant best known for her roles in BBC dramas and her stage credits include Andrew Lloyd Webber’s Bombay Dreams. West End conductor Tom Wakeley will accompany her on the piano.

The offering will include a bellini, a three course dinner and a half bottle of wine for £65. Head Chef StÃƒÂ©phane Pacoud, who trained with Pierre Koffmann at La Tante Claire, followed by 12 years at Annabel’s, has created the menu.

The selection of dishes will include Gazpacho, Shellfish en GelÃƒÂ©e, Tuna Steak aux Girolles, Grilled Fillet of Lamb au Romarin, Eton Mess and Tarte au Citron, amongst others. The starters and mains will be matched with French wines.