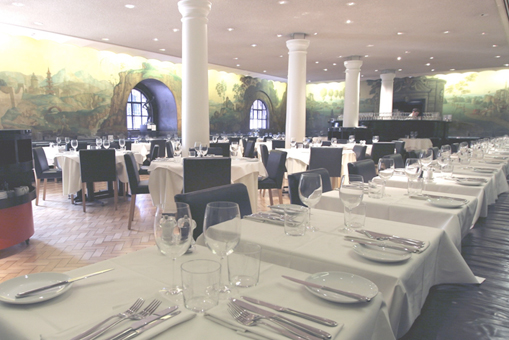 Between Christmas and New Year, the Rex Whistler Restaurant will be serving a reduced menu with seasonal comforting dishes including Devilled kidneys on toasted sour dough, Confit belly pork with braised cabbage and caramelised apples and Cranberry & walnut tart with cranberry sorbet.

In addition to being open during regular Tate gallery hours, the Rex Whistler Restaurant will be open late on the remaining Fridays of the Francis Bacon exhibition which runs until 4th January 2009. Dinner reservations are taken from 6.30pm with last orders at 8.45pm.

A January early lunch offer for reservations made before 12.30pm, will be available for all diners at the Rex Whistler Restaurant each day during January. Keenly priced at £15.00 for 2 courses and £19.00 for 3 courses, options include Cured salmon with beetroot remoulade, Game casserole with herb dumplings and Gingerbread mousse. Vegetarians are well catered for with Squash & lentil pie. For an additional £7.00 per person, diners are able to add 2 glasses of wine which have been specially selected by Tate Sommelier Hamish Anderson, to their chosen meal.

During the Van Dyck exhibition which will run in the gallery from 18th February 2009 until 17th May 2009, Tate Britain Café will be offering a hot drink and cake for just £4.95 and the Rex Whistler Restaurant will be offering quintessentially English afternoon tea for the special price of £6.95 per person.

To celebrate the finest ingredients available each month, The Rex Whistler Restaurant invites you to indulge in a special seasonal 5-course tasting menu. February’s Late at Tate will take place on Friday 6th February 2009. Head Chef, Richard Oxley, has created a sumptuous menu of contemporary British food which is matched, course by course, with outstanding wines selected from the multi-award winning wine list by Tate Sommeliers Hamish Anderson and Jade Koch. Tickets for this exceptional evening which takes place the first Friday of each month cost £60 per person.