Most of you, ok, some of you might know Alex James from that heady nineties decade whe 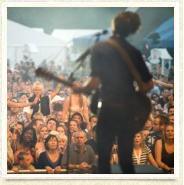 n Blur was da bomb. Most of you, ok some of you, might also know that Alex James is now a cheese maker/farmer in Oxford somewhere. And even if you’ve been under a rock for the most part of this century you’ll know who Jamie Oliver is and what he’s been up to lately.

The two lads have combined forces to put on a festival at Alex’s farm where they will celebrate their most favourite things; food, music and family. Both Oliver and James have a considerable brood, and so there’s going to be lots of family-friendly stuff on offer as well as a pretty smashing line up of bands and musicians including Gaz Coombes (from Supergrass) and The Noisettes and a whole range of food, stalls and masterclasses from big names like the Cinnamon Club to local artisanal food producers.

Now you won’t have to wait for your chance to join the Chipping Norton set to get a look into James’ farm and life in the country. Just buy a ticket, turn your collar up and pop along to The Big Feastival on September 1 and 2.

Tickets are available now from: www.thebigfeastival.com