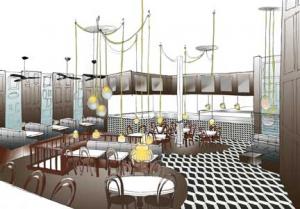 Dishoom (bless you!) aims to bring cool Bombay living to Covent Garden this July. Inspired by the disappearing old cafés that were an important part of life in India’s commercial capital throughout the last century. Dishoom serves a menu that also nods to the city’s street grills and food stalls – think Bademiya and Chowpatty Beach.

Seating 150, with 20 alfresco covers, Dishoom offers big ‘Bombay meets London’ breakfasts, lunches, early evening cocktails and suppers. Or dinners to those of us with a dictionary handy.

The open-plan kitchen should keep you entertained while you wait and the menu makes good reading – alongside chai and Bombay café dishes, Dishoom’s affordable all day café menu takes its lead from the street grills and food stalls of South Bombay, and adds a London twist.