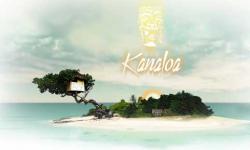 November sees the arrival of Kanaloa to the heart of the City of London. A Polynesian-themed tiki bar from the founders of Mahiki, the bar will aim to transport visitors to an exotic paradise from the moment they walk through the doors. Gosh, sounds a tall order.

Brought to London by the partnership of Nick House and Piers Adam, as well as Girls Aloud singer and unofficial party queen, Sarah Harding, along with DJ boyfriend, Tom Crane, Kanaloa takes its name from the Tiki God of the Sea and draws many of its influences from those distant Polynesian shores apparently. Underlying the Kanaloa concept is the true spirit of egalitarianism, where every guest experiences the same laid back and fun-filled atmosphere and service no matter who they are. That must mean no VIP areas, in short.

Party tribes who want to hula the night away on the dance floor will be able to head to the club area, featuring large elevated booths looking out over the action and a colour changing ceiling to reflect every mood, except presumably deep depression. Another feature of Kanaloa will be the Treetops, a rainforest styled retreat with giant palm trees, tropical leaf patterned walls, and rustic wooden planking. Guests can hide away in the branches at the top or sit in the shade of the palms underneath. We are not making this up by the way.

Despite its location in the heart of the male-dominated financial district, Kanaloa will be a City bar that breaks the mould, aimed firmly at ladies, or laydeez as we like to call them her at foodepedia. To achieve this there will be several female-friendly house rules (?)and initiatives including; free entry for ladies, complimentary manicures, massages and makeovers. What, are you saying I don’t already look good enough?