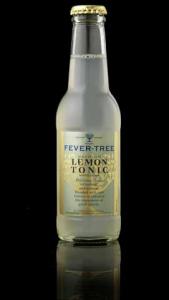 Apparently they serve Fevertree mixers at the Fat Duck and El Bulli, so one assumes they must be good. Nothing like a bit of Blue Peter-ish practical testing though is there, so we lined up some Fevertrees against some of the more usual suspects and did a blind (drunk) testing.

We weren’t actually drunk at the start, but we were a bit by the end. This was because it seemed to me, as editor, that there wasn’t much scientific method in trying the mixers straight so we pulled out a bottle of Ketel One vodka kindly donated a few weeks back and got some glasses.

We tried Fevertree’s Lemon Tonic against a ‘well known brand’, ssshhh you know who. The well known brand was already looking iffy thanks to having the green colour of the jam jar water you used when painting grass pictures at primary school. This presented a problem as we had intended to hand people glasses of mix without telling them which was which, but the colour was a giveaway. So it was eyes shut.

Everyone spotted the well known brand and dissed it against the Fevertree; ‘artificial ‘, ‘as bitter as a dumped lover’ plus some unprintable comments too. The Fever tree was ‘bitter in a good way’ , ‘refreshing, astringent’, ‘didn’t swamp the vodka but worked with it’ and everyone noticed the botanicals which gave a complex bouquet as well as the natural edge of real quinine – many lesser mixers use artificial quinine. Let’s hope they never get malaria. 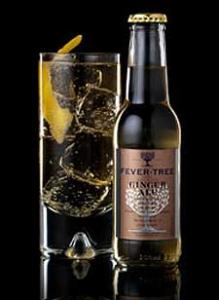 The ginger ale was excellent, like being in a Famous Five book, and we could have drunk lashings of it. It was clear in colour and crisp and apparently a blend of different types of ginger. This would have been great with a blended whisky such as Teachers, but we had already drunk that bottle the week before. It made a very pleasant drink on its own though, and we sloshed in some vodka anyway and after a couple decided we had created a brilliant new cocktail all on our own. Make way for the new Mixologists.

And so, somewhat unsteadily, on to the lemonade. This was violently fizzy and when I stuck my beak in the glass it went up my nose and led to a coughing fit. When that subsided I could appreciate how the bubbles spritzed in the mouth releasing the intricate aromas and flavours of Sicilian lemons. This was proper lemonade and far too good to give the kids.

These are just a few of Fevertree’s range of mixers and as the festive season approaches, you’ll want to get some mixers in. If you value your friends and family, you’ll make it Fevertree to show that even when slumped in front of the TV in your underwear, you can still show some taste.