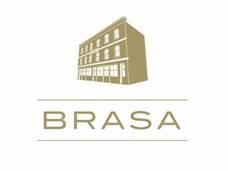 New London restaurant Brasa is due to open this month in West London. Brasa is being billed as a ‘luxury grill restaurant’ which will serve up meats cooked on a traditional grill.

Situated on London’s Fulham Broadway, the Brasa restaurant will have a carefully crafted menu based around dishes cooked on an Asador Grill, imported from the Basque Mountains area of Spain. The food will be ‘distinctly British with an emphasis on quality cuts of meat from organic UK farms’ as well as fresh fish from the Dorset coast and seasonal locally sourced ingredients.

The team behind Brasa includes Brenhan Magee, the bar and restaurant owner/operator who was instrumental in launching London restaurants like Jerusalem and Salvador & Amanda, The Club Bar and Dining in Soho and recently The Broadway Bar and Grill.

Brasa’s Head Chef Danny MacGechan ,who trained under Marco Pierre White, is bringing his effective, hearty but refined cooking style to this new London restaurant. His passion for quality ingredients shows through on the menu with starters that include Potted Rabbit with Sourdough Toast and Smoked Eel and Potato Salad. Mains such as Mersham Pheasant, Herdwick Lamb and Longhorn T-Bone cooked on the Asador Grill also feature on the menu.

An interesting range of cocktails will also be available at the bar, created using homemade infused spirits such as chilli vodka, pink grapefruit tequila and lemongrass and ginger rum.