This September Marianne Lumb aims to make minimalism the dish of the day. On 10th September, she will debut her self-titled restaurant’Marianne’, opening on Chepstow Road in West London W2, her debut on the London restaurant scene.

Drawing on her own experience as a private chef to a number of high profile clients, the restaurant will cater for just 14 covers Ã¢â‚¬â€œ a total of five tables, which makes it a pretty good place to take a plus one for an intimate first date.

Marianne will be supported by just one kitchen assistant and one front of house, working from a compact kitchen that will 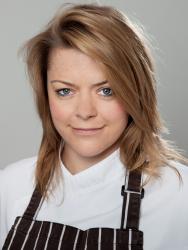 afford her unparalleled attention to detail Ã¢â‚¬â€œ add that to the Parisian size, it could very well end up feeling like you’ve stumbled upon a personal chef cooking for a private dinner. Staying true to her roots (her dad was a butcher,)Marianne will be to sourcing the best ingredients from the UK’s most celebrated producers.

Ã¢â‚¬ËœMarianne’ will offer a daily-changing seasonal menu from £48 for three courses per person at dinner, and from £30 at lunch. Sample dishes will include’SoufflÃƒÂ© of courgette, with GruyÃƒÂ¨re Alpage and Montgomery Cheddar’,’Globe artichoke and olive oil purÃƒÂ©e with dressed Cornish crab’, and’White peaches poached in rose and lavender with nougat ice cream’. Guests can also choose dishes from the menu to make up 2, 3, 4 ,5 or 6 courses priced from £26 per person for lunch / or priced from £35 per person for dinner.

On the wine front, expect a concise list of around 40 bins that will respond both to the seasons and Marianne’s menus. Created with Tom Lorimer of Lea & Sandeman It will encompass a wide variety of popular white such as’Sancerre Chavignol, Domaine Vincent Delaporte, France 2012′, alongside more eclectic variants such asÃ¢â‚¬ËœVinho Verde Loureiro, Portugal 2012′. Reds will cover the likes of a’Morellino Di Scansano 2012′ from Southern Tuscany and an authentic Acustic red’Vinyes Velles Nobles Bodegas Acustic 2010′ from the region of Montsant in North East Spain. A short selection of sparkling wines and Champagnes, will include Larmandier-Bernier and Krug and also English sparkling Nyetimber and the Coates & Seely Rose Brut NV.

The restaurant will occupy a prominent corner site at the northern end of Chepstow Road, adjacent to a quiet mews, and close to The Cow pub. Design by Godrich Interiors will reflect Marianne’s vision of having a personal chef in the dining room of one’s own home.

Sound like an enjoyable way to enjoy the crisp autumn evenings? Call 020 3675 7750 or by email reservations@restaurantmarianne.com for a reservation.