Only headless chickens desperate to be on trend could rave over this restaurant, reckons William Morris 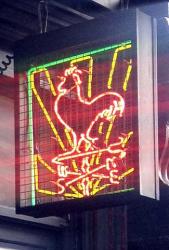 If you’re uninterested in the faddish London restaurant scene, you may not be familiar with the chef Ollie Dabbous.

He runs a restaurant under his own name in Fitzrovia and it’s supposed to be exceptionally good. I’ve never been because the waiting list is as famous as the food but almost every broadsheet critic has deified Dabbous having eaten there.

He appears to be an unassuming, trendy, humble chap, which makes him particularly likeable in an industry with Gordon Ramsay as a reference. Every word of a recent piece in the Evening Standard describing a one-on-one cookery lesson with him oozed a sort of ethereal reverence.

The journalist undoubtedly had a lovely time but her desire to be sealed in a mattress-lined capsule with Dabbous and fired into the orbit of a black hole, where gravity would bring time to a standstill and they could spend a large number of Earth years avariciously consuming each other in some hedonistic voyage through sensual and sexual experience, before returning home, cheeks glowing, as if they’d merely gone for a bracing walk, was the clear subtext of the article.

Good on him; it’s nice to be liked. But the virtually unqualified fawning seems to have come to a head with Barnyard, his pseudo-junk food offshoot a few minutes walk away on Charlotte Street.

If you show up at a reasonably adult eating time, chances are you’ll queue. We arrive early and are immediately shown to an uncushioned wooden bench and a hollowed-out barrel with a table in between. Turns out hollowed-out barrels don’t make good seats. My guess is that’s because they’re designed to contain stuff like oil, not sawn in half to contain stuff like people’s arses.

The walls are clad in corrugated iron sheeting and the place is cold. L puts her coat back on. I want to feel comfortable when I eat and neither of us is. The theme seems to be scrapyard rather than barnyard; at least in the latter there’s the chance of some soft furnishings, like hay and sheep.

We’re advised to order six plates between us, an alarming notion when some of the headline dishes, like barbecued bavette and grilled lamb, are £14 each. Crispy chicken wings and tarted-up fried egg on toast are two of the cheaper options at £7, and there are sides at £4 too. Ordering is a bit like filling the car at an expensive petrol station; you know the volume you need for the journey but you can’t help look aghast as the pounds tick over on the pump.

Six chicken wings come in smoked paprika, garlic and lemon, and they’re pleasant enough. The roast beef that counts watercress, shavings of Berkswell cheese and a horseradish sauce as companions in a salad is perfectly pink. The horseradish sauce is mayonnaise-esque in consistency and spiked with flecks of pickle. It’s the only dish we have during the evening that hints at serious expertise in the kitchen.

A side of corn on the cob comes with a bolt through it, presumably to give it a sense of playful industrial chic and help justify the £4 price tag. It doesn’t. If French fries that are indistinguishable from the ones in most fast food restaurants cost £4, like they do here, I expect every one of them to grant me a wish, no matter how fantastical. They don’t.

Popcorn ice cream with smoked fudge sauce has dilated the pupils of several people who’ve written about eating at Barnyard, so we share it, plus apple crumble with clotted cream, in the hope it will act as mitigation.

The popcorn-infused ice cream daubed in gooey fudge treacle of my imagination is replaced in reality by actual toffee popcorn sitting beneath Mr Whippy-style vanilla soft-serve with a thin fudge pouring sauce on the side. L has a few mouthfuls and looks at me as if to say’is that it?’. I look back as if to say’really sorry about this’.

Firm chunks of stewed apple and an exceptionally dry crumble mix cannot be saved by all the clotted cream in the world, and I’ve looked into ways of using it as my only energy source. I leave half the crumble amid fears it’s dragging all the moisture out of my vital organs via osmosis.

This is indicative of the main problem with Barnyard. Eating out is an activity some people are both fortunate enough and willing to do because they’re able to reconcile the expense with the pleasure they get from great food cooked with skill. But Barnyard leaves you with a big bill for fairly ordinary food that, in the main, can be had for a lot less money elsewhere. Eating there feels wasteful rather than indulgent and it sits about as badly with me as I did in that barrel.

No matter how good Dabbous the restaurant is, no matter how much I’m meant to like everything the proprietor does, I can’t recommend Barnyard just because I’m supposed to.