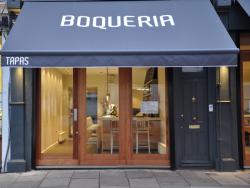 Acre Lane has changed since my time. The houses around no longer boast the 70s front doors so often fitted in that flared and flawed decade, instead Victorian doors, white plantation shutters and other classic signs of gentrification indicate that the local demographic is not what it was.

Boqueria is another indication. Where once a dodgy old shop must have stood, now a clean welcoming tapas bar beckons in the newly local foodies. The front section has a long bar, as any self-respecting tapas place should, but it’s already fully seated when we get there. In Spain you’d simply shrug and eat the house speciality upright before wandering on to the next place, here in England we decide to sit out back in the restaurant.

It’s a tad gloomy back there, we feel divorced from the action, but a semi-glass ceiling suggests this might be okay in summer sunshine. Hard floors, bare tables and acute wall angles project noise sharply and it’s a bit deafening at times as there’s a crowd of 20 something girls making a night of it, and many keep shouting ‘ammaaaaaaayzing’, for no discernible reason as they haven’t yet ordered any food.

Menus are placemats, in keeping with the modern ‘no bulls’ heads or castanets here amigo’ vibe of the place, and it’s a simple to scan menu with specials on a blackboard. We should have gone for the Jamon Iberica but foolishly scrimped £3 by having the Serrano instead. No glistening white fat, not cut from that leg on the bar. Serrano is ok, but it’s not the real deal. Our fault. Next. 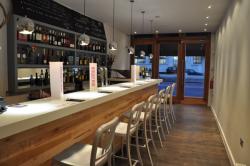 The albondigas, meat balls to us old Costas hands, were in fact made of King prawn and monkfish as promised on the blackboard. A nice idea, they fell apart rather readily and there was many a slip between cup and lip as we tried to pick them up. Once safely docked in the mouth, they had a pleasant texture and a light fishiness that didn’t leap out with flavour but grew gently.

More of a sock in the gob were the juicy mini chorizos cooked in cider, a dish from around Santander, no not the bank, the port. Cantabria has wonderful ciders, always poured from a height to add fizz, and this is a classic regional dish. Aubergine cannelloni with goat cheese and mushrooms from the hotter Catalonia region showed a friendly affinity of texture and taste, with the Shiitake mushrooms adding an oriental note, and a soupcon of grit, to what was a sunny dish. It didn’t really need the Masterchef squiggles on the plate though.

Croquetas? Oh yes please. Good ones too, the béchamel creamy the exterior crispy and it’s not easy to get both those right.. Finally we fought over a slice of suckling pig with parsnip and potato crisps, apple puree and, unannounced, a sorbet.

Now pig is all about the crackling and it comes out best from a wood fired oven, even so Boqueria’s gave good crunch. More than could be said for the crisps, which weren’t crisp at all unfortunately. The meat was right and the puree a good addition but we couldn’t help feeling that the sorbet had snuck in from another dish by mistake. 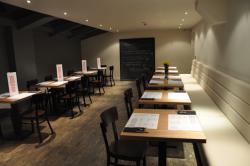 Crema Catalunya, the Spanish take on crème Brule, tasted right but the crème was a bit curdled so it wasn’t as smooth as it might have been, but no complaints about the Santiago Almond cake. This much-loved Galician dessert actually has PGI status so you’re not supposed to call it a Santiago cake unless it was made there, but we won’t call the authorities this time.

Made with almonds, eggs and almost no flour it’s usually moist and delicious and it was here. Again it suffered visually with a little over swirling of the plate, which plays well in the provinces but is anathema to us jaded urban types.

A very drinkable Crianza at £18 was a good deal as were the prices of the dishes. £20 a head without wine would get a group of people a substantial table full of tapas.

Friendly staff, a busy room and mostly up to the mark food, means Boqueria is a go-to place in what was once a bandito part of town, which should make locals, and local estate agents, very happy indeed.