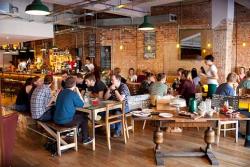 Streatham is getting trendy, it’s official. I’ve seen the bearded youths in the corner shops and heard the oncoming whirr of a single gear bike. You don’t believe it? Wake up and smell the upmarket burgers.

Brighton Way has plenty of burger options on the menu and steaks for those of us with teeth and the ability to handle cutlery. This new place has risen from the ashes of the old Genevieve pub, once the haunt of off-duty uniform police and the scene of a memorable fight, and has had its plaster knocked off the walls to reveal the bricks.

The ceiling has been taken away to reveal the guts of the air conditioning and its had those filament lamps installed, the ones that every place has to have these days. Add some seriously squishy sofas, a wall of wood, a long well-stocked bar and a menu that has a bit of something for everyone at an affordable price and you have a place that could be in one of the smarter post codes.

The people behind it are the same ones who made a success of the Exhibition Rooms in nearby Crystal Palaceso they know what works in this part of town. And with the excellent Addomme nearby and the equally excellent Bravi Ragazzi down the hill, the time is clearly right to be seen in SW16.

The menu reads right, not just the burger and steak options, but a range of what might be called more adventurous dishes too, ones that stay within the range of things that suburban eaters tend to fancy and there’s nothing wrong with that.

I kicked off with mussels. Served in one of those Belgium tin pots where the lid becomes the dustbin for shells. These were big and plump and none of them were keeping their mouths shut. Packed a bit too tightly they made it hard to reach the cream sauce beneath until I’d dispatched about half of them. The sauce was too creamy for my taste, there was no balance with the white wine and I’d have liked a load more garlic shovelled in. Nothing unpleasant about any of it, but a bit more effort on that sauce would have made a big difference.

P had soft shell crab in batter which had absorbed a bit too much oil but she didn’t mind as it still tasted fine and the burnt lime and chilli dressing and Asian salad (sic) were all good. Higher temperature on the oil was all that was needed to tighten up the dish and at the price it was a good deal.

Mains got a bit confused, or I did or the waiter did, or chef did. I ordered spatchcock chicken marinated in lemon, garlic and rosemary but I got spatchcock chicken covered in some kind of barbecue sauce, or possibly a bad red wine sauce, I couldn’t tell.

As there’d been no mention of salad accompanying I’d ordered a side salad, so I was surprised to find the chicken had exactly the same salad on the plate as there was in the bowl. One can have too much of a good thing. No chips appeared, despite being advertised as coming with the chicken, so the waiter trotted off and got some, clearly as bewildered by the strange turn of events as I was.

Anyway, the chicken was fine, once denuded of the sauce, and the salad was fresh and the chips properly thin so no problem eating it even if it wasn’t quite what I wanted. I really should have had the pork belly off the daily special menu, or the Guilthead (sic) bream but that’s so often the story of my dining life – dish envy. On the plus side P’s tuna was very good, cooked really rare as she asked because any more and you might as well get the tin opener out and be done with it.  A large piece too it sat on crushed new potatoes, roasted pepper artichoke hearts and guacamole, all zinged up with a splash lime. A good dish all round.

I enjoyed the place and I think it does what it needs to do at its level, menu confusion apart. If you’re contemplating moving to Streatham then ignore the’here be dragons’ on the bus map and think’here be coming up’.