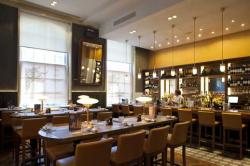 Many years ago I’d ride the creaky lift at Covent Garden station and my eyes would fall on an advert that never seemed to change.’Chez Gerard,’ it said,’ best steak-frites this side of Paris.’

I’d never actually eaten steak frites in Paris, so had no idea of the size of the gauntlet being thrown down, but the claim was intriguing.  I meant to go and find out, it sounded tempting enough, but other meals got in the way and so Gerry had to make do without my custom.

And then of course I was too late; the Chez Gerard group was bought in 2011 by a division of Raymond’Voila!’  Blanc’s empire, to be rebranded as Brasserie Blancs. However some kind of change of heart has taken place and after a big revamp the restaurant in Bishopsgate is determinedly and proudly a Chez Gerard. Time to check out that steak boast.

It’s very City inside – J and I being the only people in the restaurant not wearing ties. Downstairs is a busy bar while upstairs there’s a la carte on offer. It’s a bit of a climb up there as the lift only takes one person – presumably it was designed by the same people who make the escape pods for Bond villains

The room has a chummy classic, knowingly clichÃƒÂ©, bistro/brasserie feel with a tiled floor, etched glass dividers and little reading lamps clamped to walls and tables. In fact the latter make it feel like a first class railway carriage from yesteryear, an effect reinforced by what seem to be rechromed luggage racks on the walls the purpose of which is mysterious. For putting small children in perhaps?

The staff have the traditional CG uniform of black trousers and maroon braces, and from the sound of it traditional London restaurant Eastern European accents, and are mustard keen. The menu is cheerfully simple and short; you don’t have to like steak but it obviously helps.

Personally I always feel steak is intrinsically retro eating so I order a prawn cocktail to further wallow in that 70s mood. Or to be precise I order a rock lobster, prawn, crab and avocado cocktail that arrives in a glass chalice so massive J disappears behind it, only to be eerily refracted by its flat sides. Poking about with my fork, and humming the B52’s hit (the power of suggestion), I dredge up some decent chunks of rock lobster, a good shoal of fresh prawns and plenty of crab components. I miss my mother’s Kraft Seafood sauce though, and a bit more lime juice would have been good, perhaps a slice on the side. It’s a hearty cocktail, and I am stirred but not shaken.

J seems to not share my post Xmas aversion to more smoked salmon, so has Hickory home-smoked salmon with truffle oil. I have a dislike of truffle oil, not of course of truffles, but J says it’s all but undetectable anyway and cheerfully laps his salmon up like Daryl Hannah in Splash, but with less mess. Then it’s on to the steak.

Onglet is the choice for me, you don’t see it on offer nearly enough, and the waiter agrees that I’ll want it on the rare side; onglet can all too easily toughen up, like Clint Eastwood seeing someone torment his mule. It arrives on a wooden board, which I always find a bit off-putting, but it’s leaking red properly, and comes with a small cup of’bottomless fries’, which basically means they’ll refill it as much as you want so they stay fresh. A nice touch. The steak is rather good; it has that onglet resistance to the teeth that massages the flavour out. The chips are crispy, which is always the important thing

J has fillet because he’s one of those people who think it’s the best cut. It really isn’t, unless you’re making Beef Wellington. It’s expensive as well. At 230g it’s smaller than the fillet at Hawksmoor and at £26 with fries only about £6 cheaper. Silly prices for a cut that for me is all flash with no dash.  He’s a bit underwhelmed by the flavour (see? I was right) but steaks can also be a lottery. Breed of cattle, length of ageing, heat of grill etc. The bit I tried of his seemed fine for fillet, but I’d have wanted a hotter faster sear on the outside because the sear is what seals the flavour.

Desserts do okay, Pistachio soufflÃƒÂ©, chocolate ice cream is swearily hot inside, volcanic almost, but is nicely luminous green and the choc ice cream saves the roof of my mouth from damage. Probably a twice-cooked soufflÃƒÂ© and not a’proper’ one, but it’s a time saver many restaurants use and it’s a fair compromise.

The Steamed treacle pudding, salted caramel meanwhile is basic but good, they’ve pulled back from the caramel being too salty, and probably a wise move as for all its current trendiness salted caramel isn’t to everyone’s taste. We finish decent wines by the glass and decamp.

Overall this Chez Gerard is occupying a space a notch below places like Hawksmoor but above the All Bar Ones and similar places. It’s pricier than the latter, and that keeps out the riff-raff, and the menu isn’t going to frighten anyone. It’s location also means it will not see many tourists, or indeed anyone that doesn’t work locally, but with breakfast, lunch and dinner on offer it will certainly see plenty of business.

Lunchtime there is a Steak Express offer in the bar Ã¢â‚¬â€œ sirloin, sauce and bottomless fries for £19.95.

Breakfast is served in the bar from 7:30am Monday to Friday.