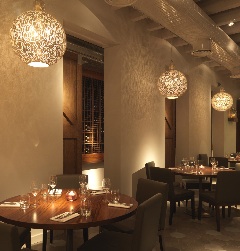 Brick Lane is just a few hundred yards away from Cinnamon Kitchen but it’s a million miles away in spirit. On Brick Lane hustlers from the endless restaurants whisper at you seductively, attempting to lure you into their establishment with promises of good times and blandishments about your wonderfulness. Most of the restaurants though are competent only in a style of cooking that is rooted in late 1970s Anglo-Indian curry houses, some are better than others and I have my personal favourite but that’s a secret.

Cinnamon Kitchen could probably do with a hustler out on the street because it’s off the beaten pavement and located in what was once London’s main spice warehouse complex. Devonshire Sq is a place where the walls still softly smell of decades of spice storage and where every now and then a glimpse of a giant door that wouldn’t disgrace a bank vault reminds you just how valuable a commodity spice was.

Certainly money has been spent creating Cinnamon Kitchen, an offshoot of the Cinnamon Club where Chef Vivek Singh has cooked up a name for himself and his stylish modern Indian cooking. As a brand new virgin space Cinnamon Kitchen was able to receive the full force of designerism, which has generally worked to impressive effect. The large room has the feel of somewhere from Grand Designs and eyes are kept off the industrial ceiling by the magnetic effect of dark woods and candles placed lower down. Tables are big, my chair had a loose arm, and at the back a large glass wall conceals what glimpses suggest must be a massive kitchen.

The lunch menu is short, a very good thing, with a three-courser on offer for £18. We went a la carte though and, unable to decide from the attractive sounding starters, had instead the platter of assorted grills for two. While we waited there was a range of fancy German beers to try, along with the now obligatory Kingfishers, and an ‘amuse’ of a classic street food Pani Puri; a little taste bomb that has to be eaten whole if you aren’t to make a sudden mess of your shirt. A selection of some the different breads on offer came with some superb chutneys that had us violently clashing spoons as we tried to ladle the maximum amount out, particularly of the one that was oxymoronically fiery and sweet all at the same time.

The mixed grill starter proper when it arrived had all kinds of good things on an elegant long black plate; chunks of salmon perfectly cooked over clove smoke so that the centre was almost sashimi while the outer skin was crisp. Duck with sesame and tamarind glaze was again properly cooked so as not to be tough, but wasn’t particularly exciting. King Crab leg served with the brown meat stir fried separately was excellent, the white meat’s simple fresh sweetness rushing to embrace the brown meat’s spice that had a restrained dash of fire. The ‘fat’ chillies with Hyderabad lamb mince were subtle and delicious and the whole platter was a good journey through taste. We could have left happy at that point.

After a cleansing beetroot sorbet with basil we tackled the mains. A seared haddock with Devon crab and kokum (a rarely seen spice outside of India’s coastal regions) crust was lapped up by its chooser, whose only criticism was that the crab crust was perhaps gilding the lily, as the haddock was wonderful all on its own with the bowl of masala mashed potato. My roast rack of lamb with mint and onion sauce teetered on the edge of being too rare, but I’d rather that than overdone. The meat was excellent and the swirling sauce soaked up by the rice made a great combination of English and Indian flavours. We finished with a yoghurt brulee that was delicate and settling on the stomach.

Chef was by now touring tables and welcoming back returning regulars, of which he understandably seems to have quite a lot. The cooking here is elegant and refined which means no massive portions and it’s possible to indulge freely and not need a lie down afterwards. While its location may be somewhat secret, the Cinnamon Kitchen, and its accompanying bar Anise, should be shared with all those who want an unique and classy Indian experience.