Walking through Westminster after 7pm is a little like walking onto a film noir set afterhours: it is strangely quiet, that beautiful smog-grey-sky lending an uncanny aspect to the cityscape. Past an empty Downing Street and a spectral abbey two pairs of feet, slightly out of unison, crunch through an avalanche of autumn leaves. Urban icons announce the past like heralds flanking some gloriously melancholy avenue of history. It is the 5thof November and other than the regular huddle of a security unit; the occasional pop of a premature firework, there is hush. There is eerie splendour. There is a distinct lack of restaurants.

I’m wondering how, or even why London’s premier Indian restaurant would insinuate itself into such austere surroundings when we almost walk right past the old Westminster library, a grade II listed building of mellow red brick and dignified symmetry, aka The Cinnamon Club. Outside on the pavement a small swing-sign like those used to advertise Wall’s Mr Whippy announces the venue; it makes me smile. In fact, The Cinnamon Club made me smile so much that it’s possible that the staff had me down as some happy halfwit who stumbled in off the street expecting to check out a few books.

Although undeniably upmarket there’s a relaxed confidence that suggests that The Cinnamon Club knows it’s good and doesn’t have to stand on ceremony to prove it, and for this I’m inordinately grateful. I don’t much care for formality. I barely cope with the strictures of public decorum, so that, if faced with five sets of cutlery and a stiff sommelier I must battle a fiercely perverse urge to spear my food with a toothpick, or grapple with the flower arrangement, or plunge my finger into molten candle wax – not because I’m a rebel you understand, but because I’m neurotic.

The Cinnamon Club is high and airy and warm with light; it’s a classically beautiful space expertly adapted for the purpose of genteel food processing. The staff are French and charming; they attempt a sincere and not unsuccessful pronunciation of my full name before presenting us with complimentary and possibly commiserative cinnamon Bellinis. This is the CC’s signature drink and it’s good. My accomplice claims that she can taste cloves in the mix but I suspect she’s suffering the effects of inhaling too much of the bong smoke that wafts in through her open window from the upstairs flat. ‘Mmm, cloves,” I say.

The restaurant is currently serving specialities of roe deer and Kobe beef, which I’m sure are both delicious but neither of which floats my personal boat; even at £95 a pop I’m not convinced the production of this Japanese delectable should be used as an excuse for heavy bovine petting. My ‘Carpaccio of cured salmon, tandoori salmon and green pea relish” was delicious: sweet fish, sweet pea with a hit of peppery wasabi and a nugget of spiced salmon providing a little firm-texture. Katie’s ‘Grilled Scottish king scallops with stir-fried baby squid and cauliflower puree” was another dainty triumph. The scallop’s had been really well seared, firming-up the outer meat and giving it a rich, caramelised sweetness that worked well with the spiciness of the squid. 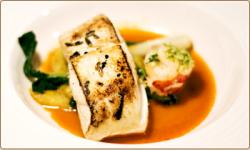 An exciting discovery was the Sula Nashik Shiraz, an Indian wine recommended to partner our seafood; the dark fruit and spice rounded with leather and wood-smoke worked brilliantly with the charred smokiness of ‘Hot and sweet king prawns with Alleppey curry sauce, brown basmati rice;” three meaty morsel each the size of a babies fist came liberally dusted with chilli and soothed by a rich and creamy sauce. ‘Char-grilled halibut with Bengali ‘dopyaza’ sauce, ghee rice” tasted wonderfully exotic and the robust halibut worked just as well as monk fish with its perfumed layers of flavour.

Its ten years since The Cinnamon Club redefined Indian cuisine for an English audience and although classical in execution the cooking remains innovative. I previously had the pleasure of interviewing founder Vivek Singh whose unpretentious understanding of food has led him to a philosophical view of Anglo-Indian cuisine which encompasses not only the hybrid cuisine evolved by Bengali immigrants with its vidaloos and tikka masalas, but also the traditionally refined food of India’s raj and royalty that celebrates subtly and quality ingredients. The Cinnamon Club definitively falls into the latter category, and yet the novelty of exotically spiced food served in haute style still feels relatively avant-garde.

The arrival of the special taster-plate of desserts bearing ten or so miniature puddings turns everyone in the close vicinity into kids in a sweetshop. There are audible Ooo’s as the incredible looking plate, a grand flourish of a sugary finger in the direction of any dining dentists, is set before us. This is a fine ending to the meal with a good ratio of sharp and lemony to toffee and chocolate. I particularly liked a zingy lemon tart with raspberry while Katie, still suffering passive bong pangs, fell on the chocolate soufflé like a tramp on chips.

I really like The Cinnamon Club; it has heaps of style and an animated atmosphere that contrasts with the quiet night outside. It takes a certain amount of audacity to pull off this location but I’d make the journey any night of the week, because Westminster by night evokes an enigmatic and perhaps more European beauty than we usually associate with the capital, and because unlike the hustle and bustle of all those Soho venues, The Cinnamon Club isn’t the pre-event darling, it is the event.