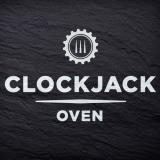 Walk through any French outdoor market and you’ll find someone selling spit-roasted chickens from what looks like a modified fairground ride. These machines cook chooks twenty or thirty at at a time, rotating in a hypnotic synchronised dance as they slowly acquire a deep, golden crispy tan.

Walk through any English ASDA and you’ll see much the same thing; golden chickens with tasty promise. So if French itinerant traders can do it, and the green fleece of ASDA can do it, why can’t Clockjack in Soho do it?

The first thing that made J and I, both of us bird fanciers, twitch was the sight of the cooked  birds suspended in a glass case rather like museum exhibits and with the deathly pallor of a Streatham crackhead – pasty, ill-looking and worth reporting to the police. From across the room you could see the skin had all the crispiness of a wet flannel. We debated leaving there and then but decided that maybe these weren’t  the chickens we’d be eating. God knows what made us think that, blind optimism probably.

Seated at the clearly expensive wooden bar and perched unsteadily on natty stools, we were treated to the sight of a server plucking one of the fowl exhibits from its mausoleum and taking it to bits with poultry shears just inches from our noses. The smell of chicken fat was overpowering, the spectacle unappetising. If it were my restaurant I’d have the chickens dismantled well away from the punters’ gaze and done with noisy theatrical clean blows from a cleaver, not the squelchy sound of shears.

The room could certainly do with some livening up because at lunchtime it was mostly empty. No sounds, no atmosphere just the sight of the Brittany chickens morosely roosting and no doubt wondering what they had done to deserve such a fate. The rotisserie didn’t even have any chickens in it, just naked gas flames wastefully jetting into nothing and warming us globally.

We ate a whole chicken in ten pieces for £17.95 served with a selection of sauces shamelessly squirted into their bowls from plastic bottles behind the bar. Yes it happens in every restaurant, and there’s nothing wrong with it, but why not do it out of the customers’ sight for heaven’s sake?

The chicken skin was, as we guessed it would be, terrible. Greasy, lank and tasteless. Fit only to be peeled off like a soggy condom and as quickly discarded. The unseasoned meat was moist, verging on wet, and tasted of not much at all, not even chicken. The menu boasts that Clockjack’s marinade is a special secret recipe. The secret may possibly be that it’s just tap water.

We gamely ate it anyway; it was lukewarm but it was at least safely cooked through. The sauces were okay if you like synthetic tasting sauces – the chilli sauce was wussy and the Caesar was definitely not fit for an emperor. The chips were decently crispy but they tasted of fish for some reason, perhaps the oil needed changing, or maybe the bloke in charge of the fryer did.

And off we went, having paid £35 for a bird that didn’t fly, some so-so chips and two bottles of beer. For that money we could have done a lot better almost anywhere else in Soho.

This trendy fowl-up may get some innocents flocking in to spend their money, but it shouldn’t get the real bird spotters in a flap. The next time I fancy roast chicken I’ll wait until Sunday and cook my own, or go to ASDA and get one of theirs. At least I know it’ll be roasted right instead of being totally clocked.