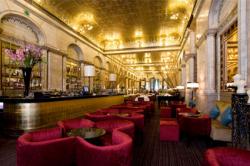 Nothing prepares you for the gilded majesty of the Criterion when you enter after, of course, first dodging all the tourists camped out on the statue of Eros. I remember when Eros was an island, a good idea I thought, even if no man should be.

I also remember when Marco ‘Jigsaw’ Pierre White was at the hob at the Criterion. Was it better then? I can’t say, too many meals have gone under the belt since that time. I do remember the room was getting a bit faded, a bit past it. Now under new Russian owners, and wealthy Russians do love a bit of bling, it’s looking really rather good for a place going since 1874. The gold, the mirrors, the lamps and the shades are all very 1920s, very Bright Young Things and very impressive. Why then, after all this effort, is the sound system playing 80’s pop at an intrusive volume? It’s horrible, it’s the Dross in Luther Van and it’s unforgiveably at odds with the décor and the fine heavy linen.

It’s a bit quiet this lunchtime, which leads me to notice that one diner is wearing a very dodgy wig. Not only is the colour wrong, it sits on his head ‘like a Lego man’s hair?’ suggests J also clocking the syrup across the room. However, even when somewhat empty, the space’s ergonomics keep it from appearing too barn-like. You get to admire the same view, pretty much, that Winston Churchill, Edgar Alan Poe and the suffragettes also gazed upon. It’s a bit of genuine London class, while outside is increasingly a sea of London tat.

Cooking here now is Matthew Foxon, ex of the Rosendale, my local gastro pub. I liked the food when he was there but I haven’t been back since he left. Can he cook for a different clientele to young, pram-pushing, professionals? Let’s see.

My mussel and prawn soup is strangely cool in places and tongue-terrifyingly hot in others, I suspect someone let it boil, which is not a good idea. The mussels are still in their shells, so a bit of splashing is inevitable and I’m sorry about the tablecloth. The stains will come out I’m sure. The mussels are plump and the prawns large. The soup itself is quite flavoursome but not as ‘fishy’ as I like. Worryingly I find a very large tangle of mussel ‘beard’ which has got into the soup at some point. This is bad because if eaten it can often cause severe stomach upset and at the very least would have made me feel like I was eating matey’s wig across the way.

Crab risotto has been cooked well, the grains just holding that al dente centre, but a bit too much salt has been put in the stock. A good quantity of brown crab meat is on top, the less elegant part of the crab but definitely the tastiest. Not bad, not stunning. Oddly when the dishes are cleared away a piece of carrot is left on the table and we didn’t have any carrot. It must have been stuck under a plate in the kitchen and carried out. Hmmm.

The menu states that the seafood has been driven from Looe in Cornwall that very day and I imagine a bleary-eyed Cornishman belting his Vauxhall Astra up the M4 at dawn with a glum-faced turbot sat in the back. Is this good for the Criterion’s carbon footprint? Is it good for the turbot? The meat is ‘butchered’ on the premises, a verb that always makes me think that Sweeney Todd is in the kitchen. 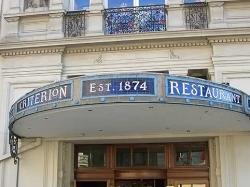 Black Pig Chop sounds more interesting than the ubiquitous Gloucester Old Spot and the taste is certainly clear and porky, the cooking method is hard to identify though. Is it pan fried? No sign of any oil. Is it grilled? No sign of any caramelisation. Has it been cooked in the oven? I’m inclined to think it has, which is unusual. It has the bone in it, though, so gnawing is possible on the sweet, moist meat. The black pudding that comes with it is lovely, crumbly stuff and the pea puree a colourful addition.

King Fish with chermoula is close to not being cooked through, but is none the less still safe. The skin is not seared though, so that it becomes a limp thing to be discarded not enjoyed, which is a shame. Olives in the surrounding sauce gang up and mug the fish which can’t defend itself against their overpowering flavour. If the chermoula had been laid on more generously, the fish might have had a fighting chance. Chips are pretty good while sautéed Ratte potatoes show why you don’t see these fine spuds sautéed normally. It doesn’t work, steamed or boiled is really best.

And so to pud. I like the way my vanilla panacotta with strawberry jelly has been left to set in a tilted glass so that it comes to table on the slant – a neat trick. The panacotta is rather too firm, I suppose it had to be in order to support the jelly which reminds me, as jelly always does, of being at a kid’s party. Tastes good though.

So does the Criterion meet the criteria? Decor and sense of period and place are excellent. Food is okay, but there seemed some slackness on the day we were there, what with unwanted additions to the soup and wait staff bunging dishes down as if eager to be off. I think chef is better than this but for some reason is not running a tight ship. Which, as The Criterion looks like the inside of The Titanic, may be tempting fate.