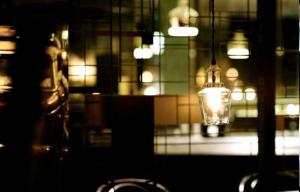 Dishoom! Bless you. Ah yes the old jokes are still good but the joke right now is that some people are mistaking Dishoom for a restaurant and bemoaning the fast service and lack of laid tables.

Hellooo, as the younger generation say, which part of Dishoom Bombay Café didn’t you understand? Ok yes, Bombay is no longer the correct name for the place that no one but The Guardian bothers to call Mumbai, but the word café surely tells you all you need to know ?

Inside it’s as false as any other themed place in London. Packed with patina that you pay for and install in great swathes. So what though? The pictures are actually rather interesting, the interior clean and bright and I am not eating the décor, even if some critics appear to be chewing the carpet about it. If I want to see an authentic Bombay Café I can always go to Bombay. Except I can’t, because they’ve all gone, apparently.

So here we have a copy of a type of café that no longer exists, which is post-modern irony layered upon irony and makes my head swim just thinking about it.

I like the open space, the noir et blanc, the airiness. I like seeing a man making flatbreads fresh on the spot and I like seeing chefs lowering skewers of meat into red-hot ovens. Would it be better if there was a sacred cow shuffling down the road outside? Not really, this is my kind of Bombay – air conditioned and sanitised.

Little ‘Café crisps’ replace poppadoms as ‘keep the customer quiet’ nibbles. They aren’t bad but are too small to eat with the chutneys, which is a shame as the chutneys are better than usual, spicy and complex. They go well with a St Martini, a pomegranate, gin and chilli syrup cocktail, rather too well as I start to fancy another cocktail halfway through the first.

The menu is a monster. We can ignore the breakfast items, it being lunchtime, but it’s still a hard call. The dishes are small enough to be able to order lots but the fear of over- ordering is still everpresent.

If you do go for too many dishes a little stand, of the kind used to support cakes in Tonbridge Tea Rooms, is employed to give you more elbowroom, which is a nice touch. We were forewarned of the dangers of greed though and kept the dish count consequently low. Chicken tikka was easy to share, the cubes of meat spiced with a knowing hand and all the better for not being swamped in very un-Bombay Masala gravy. Made for sharing these, you can pop a cube without breaking a joke and be reaching out for another instantly.

Not so sharable were three grilled lamb chops, as three into two doesn’t go. I snaffled the spare as they were very good indeed; well charred outside and borderline raw inside. That may sound like a negative to you, but not to me. I’ve had better examples, for instance at Benares, but only at four times the price.

The calamari, spiced fried squid, was also very good being both tender and more-ish, the only downside being the one I always have when eating squid – I can’t help feeling a bit guilty. From what you read about squid we should perhaps be engaging them in conversation, not coating them in batter. We will look like fools when they escape from the fryer and take over the world for their Martian masters.

‘Ruby of the day’ is a rather annoying bit of language but the dish itself, a potato curry, was okay without being much to write home to Bombay about. The spuds were a bit hard but the sauce mild and it at least moistened the rice. Nan breads, offered with or without butter weightwatchers, were the best I’ve had for a while. Not the usual tasteless reheated duvets, these had crispy bits and were surprisingly delicate.

To end, Kulfi On a Stick, which sounded like it could be an Asian Edinburgh fringe comedy workshop. It is of course just the ubiquitous Indian ‘ice cream’ presented in way that doesn’t involve the usual hard work with a bendy spoon. Nice.

There’s a lot to enjoy at Dishoom, from breakfast to dinner, and even though it’s bang next door to Jamie’s Italian (Jamie’s Italian what?) its unique style means it’s not competing with it or the other neighbours. There’s nothing else quite like Dishoom and if it turns into a world dominating chain it wouldn’t be a bad thing for those who want a good fast meal at a good fair price. The decor may be false, but I can genuinely say I’ll be back for more.