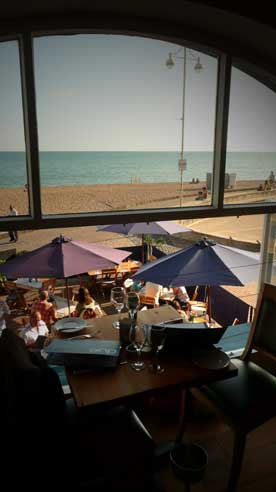 The title of this restaurant worried me. Not only does it have ‘Carry On’ connotations, it also sounds like the title of a hellish, low budget, box-ticking sitcom.

Located in somewhat claustrophobic arches between Brighton’s ruined piers, one a listed wreck and the other a luminous palace of tat, this shabby-chic, fish-inclined restaurant won The Observer’s title of best seaside eatery a few years back. Contributing to the city’s annual surge of eight million tourists, I headed due south to ‘Due South’ interested to see whether the accolade still holds true today.

My friend and I arrived early enough to bag the best table in the house, which was topped by a thistle. Only bookable by couples who married in the restaurant (how one hopes they tied the knot for better reasons than that) it follows a large open window. A limp wire runs parallel, confirmed as a health and safety measure to prevent drunken kamikazes to the terrace below.

In my experience, from Brighton’s Lanes to the hard, noisy beach, diners must choose from three types of eatery: old oil tarnished fish and chips, worthily organic, ethically informed restaurants, or celebrity spin-offs, like Dermot O’Leary’s ‘Fishy Fishy’, which opened last month. With a menu spouting such gobblage as: ‘80% of our ingredients are supplied by independent businesses within a 35mile radius’, you can guess to which category Due South subscribes. Rather unlovely, filtered Brighton tap water comes in a blue flower-power bottle called ‘Life’; salad is biodynamic. Apparently, ‘the team remains convinced that food is special precisely because it isn’t available 365 days a year.’ Laudable, but heavy-handed, I wondered whether the team might also have a company song (complete with actions).

Joking aside, armed as ever with an all-encompassing appetite, I hoped that dining on ethics would mean nourishment, not punishment.

Chilled lobster and tomato consommé with snaky noodles and seedlings was fishy-fresh and woodsy. From well within the sourcing radius, a glass of pink came from students at Plumpton, currently England’s only winemaking college. Lip-smacking, with hints of slightly sour berries, it proved a good effort (A-) although my preference remains their cutely titled, ‘Dean’s Blush’ fizz.

Noting that this is a seaside, rather than exclusively seafood restaurant, from a named farm I chose lamb’s loin, gently pan roasted so still pink and moist, and cut into discs. These were edged with luscious fatty corners and served with perfectly braised lamb’s shoulder, briskly fresh peas and pea purée, and a breaded arrowhead of deep fried pork belly (standing-in for the advertised tongue). A side order of evenly double-cooked chips, scattered with what one might presume is local sea salt proved crisp and cosy.

But pudding was far and away the most elegant course. A gold painted strawberry berthed on a squiggle of white chocolate and vanilla nudged a delicate, but discernible elderflower sorbet and gin scented jelly.

Overall – thank goodness – Due South proved that from a confident kitchen, do-goody, foody ethics need not taste wimpy. But from good taste to bad, there is another incentive for diners to visit. Such an overtly green establishment allows diners who might normally motor to supermarkets, bury plastic bags, and fly with abandon, to momentarily salve their carbon dense consciences…