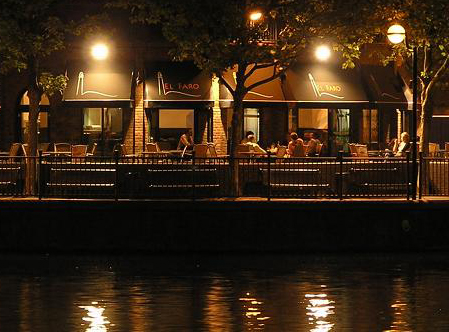 El Faro is a detached polygon overlooking Turnberry Quay, by Millwall Outer Dock, the main dining area on the ground floor has great views over the placid waters of the Quay and Dock and as the darkness of night draws in the lights from waterside buildings twinkle pleasantly on the water. Internally its chunky dark wood tables, dark wood panelling and exposed brickwork help to give you the feel of a typical tapas bar. You could easily imagine you were actually in Spain, apart from the weather that is! El Faro source most of their produce from Spanish suppliers and their menu includes authentic dishes from most Spanish regions.

As starters we selected four tapas dishes, these arrived one after the other, at a nice pace. The first of these was the Jabugo Ham, thinly sliced with a full flavour and accompanied by some lightly toasted rustic bread, topped with chopped tomatoes. Next we had the meatballs, which were beautifully tender and supported well by a good sauce with mixed wild mushrooms. Next we had the king prawn ravioli stuffed with wild mushroom and onion and delivered covered in a fennel foam and sitting in a prawn sauce, these very different flavours came together well and were a delight on the palate. Finally we had the fried potato and egg choosing the black pudding as the accompanying ingredient, these ingredients were then chopped together and served, it made an interesting and tasty finale to our first course.

After a short rest, which we needed, we moved on to mains, the fillet steak, served medium rare as requested had a deep red/pinkness great texture and good flavour, and arrived with some lovely little potato and cheese mini cakes. The grilled red tuna loin was meaty hunk of fish, cooked medium rare it was moist and nicely pink throughout. It had great flavour and was well balanced by the beetroot puree and potato foam it was served with. The roast suckling pig was amazingly tender, and full flavoured coated as it was with some nice crispy crackling and accompanied by a very sharp and pleasing mango tatin.

Well, as you might imagine, following that we needed to rest a little before tackling dessert, but valiantly, we did so and we were pleased that we did as this brought us a lovely Catalan cream which had a light caramel crust, creamy rice, accompanied by an almond and orange crisp, and almond cake, all three of which were excellent.

With our meal we had a bottle of the recommended house wine, which at £17 a bottle was a little more expensive than some of the wines on the list, which start at a little over £13 a bottle. There were a number of wines by the glass and we tried a recommended red, a full-bodied juicy mouthful. Service at El Faro was attentive and courteous throughout. It is worth knowing that some of the dishes are quite generous, but the staff are very helpful in guiding you through the menu. So, if you want to have a taste of authentic Spanish cuisine, without jumping on a plane and then having to seek out the right place, it is well worth a trip to El Faro.