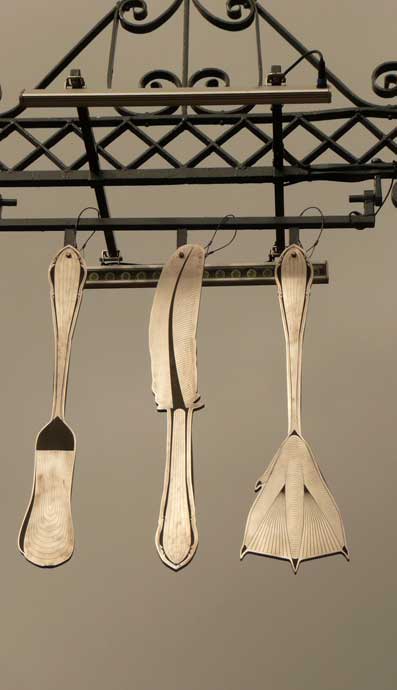 Three days following a fun lunch at Heston Blumenthal’s revamped ‘Little Chef’, I was at ‘The Fat Duck’ for the strangest lunch of my life. Linen guides rate it the world’s second best restaurant and despite it being in Berkshire, one guide even describes it as ‘London’s finest’. I wondered whether the ‘chef of the century’, poised to overtake Ramsay as Britain’s most celebrated culinary talent, might have allowed a once surprising restaurant to become tired. Was it resting on the reputation of snail porridge and bacon and egg ice cream? And could the 15-course menu be described as food, art, alchemy or all three?

With a £320 deposit at risk, I was determined not to fall ill beforehand. This was ironic considering only days after my visit; Blumenthal temporarily closed The Fat Duck. Up to 500 diners claimed sickness – some at the table. The situation was later attributed to staff infected with a vigorous vomiting bug. Whilst I hit vitamins hard, a friend was not so lucky, worrying himself ill past the point of no (deposit) return. A table of four became three and it took a lawyer from our group to persuade reservations against charging the absentee.

We set off from Paddington’s platform 13, mischievously popping bubbles before Ealing Broadway. In Bray, I expected liquid nitrogen to tumble from the modest building’s chimney pots, although there was enough inside to make me wonder whether Blumenthal required special insurance.

The simple, beamed room had slightly silvery walls graced by murky mustard canvases. Asking about them, my friend was told ‘wall decorations” but heard ‘war in Croatia” and nodded – a sign that he had suspended disbelief at the door. Amongst the 40 diners were chefs on pilgrimage, footballers and their floozies and a round top of what looked like an optometrists convention

Having taken the aperitif en-route, we resisted the Champagne cart, which can turn black bank balances red. Whilst gnawing suppository shaped picholine olives we took in the menu – the program to the show. Along with Raymond Blanc and Marco Pierre White, Blumenthal is one of several chefs in business today who takes inspiration from his childhood. Judging by a comment card inviting diners most touching food memories, yours too might be plated one day.

The first instalments came in quick-fire succession. Table theatrics set the scene. Green tea, lime and vodka were piped into nitrogen then puffed with tea powder. One of us choked, and another breathed steam whilst tackling the messily cracking, fast dissolving, colder than ice meringue. A mutinous mixture followed: lavender flecked oyster in passion fruit jelly, seated on horseradish. Not an improvement on nature. Another ruse of an amuse involved an inedible prop of tangled oak moss, looking like Hornby train set scenery, foggily flooded with nitrogen. The exaggerated smell reminded me of a childhood visit to the damp, earthy Jorvik Viking Centre. Looking on, we sucked sachets of moss flavoured ‘Fat Duck Films’, followed by quail jelly, cream of langoustine, foie gras parfait and truffle toast. The menu mentioned that this clever combination was a ‘homage’ to Alain Chapel, avant-garde originator of Nouvelle Cuisine, admired by Blumenthal.

My friend, a self-styled ‘hopeless fine wine drunk’, raided his cellar, equipping our table with a bottle of premier league ’85 Lafite Rothschild. I agreed with his recommendation that rather then moss, Blumenthal should be making flavour films of the distractingly lovely wine. Released from a comically long decanter, it was breathtaking: sweet briar, camphor, serious cigar and a little vanilla, with just a jag of bitterness. Had we bought an equivalent from the 50-page list, we would be bankrupt.

The snail porridge with jabugo ham and shaved fennel was easily the best example I have tasted (and also the only one). The nourishing specimens had an almost ginger edge and salad leaf freshness. The most arresting course however was ‘Sound of The Sea’. Representing the seashore, crustaceans were beached on tapioca sand, woven with elvers and fish foam, which gave the impression of sea scum. It looked like a British beach before the blue flag. The restaurant’s only concession to music was an iPod set into a conch. It therapeutically sent breaking waves and gull shrieks through my skull. Rather enjoyable at first, although the experience soon felt too contrived and underlined the unsocial aspect of the meal. With so many explanations, sweepers, new cutlery settings and attention grabbing spectacles, holding a conversation was hard.

The least successful course came heat-lamp gelled: a wedge of gelatinous salmon bleakly coated in black liquorice. I pity the lackey who plucked the dozens of pink grapefruit cells, artfully scattering the square plate. A scrape of vanilla mayonnaise glued artichoke segments. Drizzles of one of the best olive oils were utterly lost in the collage. It was greasily jarring. Another dish that had fallen over the edge of good taste was slow cooked ballotine of Anjou pigeon, pierced by a Quaver like crisp. It appeared so sanguine as to seem barely dead. Soft, like most things so far, I could have coped without teeth.

An iced tea cleanser started hot, turning frosty in the same sip. An infantilising sherbet style clove dib-dab tasted chalkily of theatre smoke. For reasons unknown, we finished with breakfast. A variety-sized pack of patronising parsnip cereal finished fatly sweet and felt wrong right now. Nitro-scrambled egg and bacon ice cream was subversion too far. A slippery custard was cracked from a modified egg into a nitrogen ‘stove’ by a wide-eyed Maitre’d. It was spliced with sweetened pancetta. The lawyer left it well alone. With its reassuring vibe of marmalade and Werthers original, our wine again upstaged kitchen kraft (’89 Coutet ‘Cuvee Madame’).

Whilst likening the Fat Duck’s dishes to abstract art, which is almost certainly the hardest style to realise, it seems that critics come down hard on another culinary OBE. Gordon Ramsay is attacked for producing refined, but classical dishes. At least, we are told, Blumenthal gets a reaction.
Overall, I felt that the self-trained Blumenthal cooks very personally, meaning firstly for himself, with the fruits of his passion almost unquestionably admired by a flock of rich foodies and dreamy eyed quack chef wannabes. Ramsay, however, knows the value of cultivating regular palates versus a continually unsettling tightrope approach to food.

Towards the end, I felt queasy. The Sound of the Sea begun to rebound like the waves it represented. Fifteen endlessly tweaked courses had been intellectually, emotionally and physically demanding. Truffle toast and porridge aside, the silly onslaught of froth, nitrogen baths and tarted-up rock oysters had seemed peculiarly far from food. We had even inserted a cheese course to bring a note of sanity.
We finished with Aero like petits fours and entirely edible apple pie caramels (including gummy wrappers). How strange to feel like kids when faced with a very adult bill, which had escalated to over £200 each without a dribble from the wine list. That is the cost of two Fat Duck cookbooks, or ten lunches at his Little Chef. Avoiding a tea list with pots rising to £35, we headed for a post mortem pint of Rebellion in Blumenthal’s ‘ideal pub’, The Hind’s Head, next door…

In all honesty, Rebellion tasted better here, malty, hoppy, traditional rather than twisted and unembellished into the realms of the outlandish. Whilst I am sure Blumenthal intended The Fat Duck experience to be fun, several weeks on I find myself (at least temporarily) cured of the desire to dine at linen clad temples to gastronomy. In that sense, Blumenthal may have saved me a fortune…