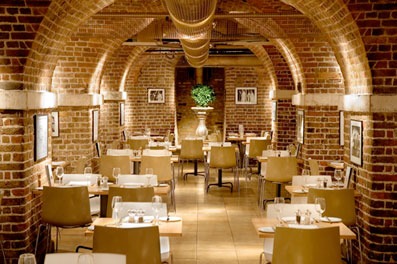 Some things purr on, doing their business, no X-factor genes pumping their spoilt podgy dancing legs. One of these is the modest but wonderful Footstool Restaurant in the brick-vaulted crypt of St Johns church in Smith Square, Westminster.

A retreat from the surrounding Millbank mania, the square’s Baroque 1728 church was apparently so-named the Footstool by Queen Anne after her architect asked her what design Ma’am fancied. Phut! She kicked her footstool over resulting in a church that resembled an upturned footstool, its four corner towers the heaven-destined legs.

But enough of this ramble – the food the day we visited was well-executed, clean flavoured and honest. If you don’t mind sitting elbow to elbow with senior civil servants from the neighbouring government departments, Footstool’s cosy atmosphere exudes the bonhomie of well-fed politicians. The distinctly post-colonial waiting staff contrasted curiously with the mainly white, middle-aged male diners however – but perhaps the Whitehall mandarins like it this way.

Footstool introduced a new lunch menu just before Christmas, designed by Sean Davies, head chef for the Tate. Trying this, I started with grilled Vacherin cheese with red endive, roasted fig and truffle honey – thoughtful, balanced and intelligent, understated but robust in flavour. The bitter endive sashayed with the pillowy figs before the salt of the cheese lanced through. A’s salad of fine green beans, red onion and pickled wild mushrooms was far less prosaic than the menu suggested – such delicate, oriental flavours.

A then had Cornish sea bream with braised squid, mussels and saffron ordered with a side of chips cooked in dripping – a yellow, buttery success of a dish. My roast duck with confit duck leg, mash potato and Madeira poached grapes was rich, boy was it, but juicily alcoholic and fed by a gamey vein of flavour.

Happily, for its clientele, the drinks menu is extensive, with quirky tasting notes by the head sommelier Hamish Anderson. For instance, on a pale ale, he comments, ‘my wife, who ‘doesn’t like beer”, drinks it by the gallon’ – a fact she’ll no doubt thrill at sharing. No gallons for us, just tipples. A had a William Worthington’s White Shield India Pale Ale, clean as flintstone and fresh enough for lunchtime. My 2007 Las Brisas Pinot Noir at £4.50 a glass was worth every silky drop of bulbous berriness. And then leaving A, I waltzed off, or perhaps pavaned, and watched a frosted sunset in nearby St James Park.