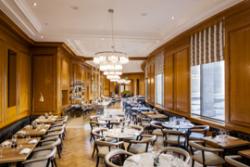 If Gillray’s Steak House was a celebrity, it would be Prince Harry Ã¢â‚¬â€œ classy with a rebellious streak. The bar boasts 62 different types of gin, knock-yer-socks-off cocktails and its signature dish is a whopping 1kg slab of steak entitled’Bull’s Head’.

Not for the faint-hearted. Even the dÃƒÂ©cor has a twist with traditional wood panelling, black leather armchairs and marble tables jazzed up by a blinged-up flower-shaped chandelier and bright yellow sofas. Oh, and wait until you find out what they serve instead of bread rollsÃ¢â‚¬Â¦

It’s fitting that the restaurant has its quirks, and a view of the Houses of Parliament, because it’s named after James Gillray, a rebellious Georgian caricaturist who lampooned politicians of his time.

If you weren’t looking for Gillray’s you might struggle to find it. It’s actually in London’s County Hall, accessed through the Marriott Hotel, but its location makes it a hidden gem because you get a stunning view of the South Bank, without the throngs of tourists.

We went on a Monday night before the’killer smog’ turned the sky yellow like something out of The Hunger Games, and got stuck into the cocktails. I chose Night Bird, a dusky-pink perfume rush of cardamom, vanilla and gin. T’s Unexpected Pleasure came in two parts – a martini glass with a gobstopper of ice and gin and a cocktail shaker filled with a syrup that tasted like melted orange and strawberry ice lollies.

The magic continued with At Dusk, a concoction with notes of ginger, pineapple and lemon, served in a bell-jar clouded with smoke. It tasted like an exotic bonfire. T’s 8’o’clock was like a naughty hen do breakfast tipple Ã¢â‚¬â€œ yoghurt liqueur, raspberries, vodka and honey masquerading as a bubblegum-pink smoothie crowned with a scattering of muesli.

Gillray’s prides itself on sourcing all its food from Britain so the oysters are from Cornwall and the pork’s from Gloucester. There’s every cut of steak imaginable (fillet, rib-eye, skirt, rump and many more) as well as alternatives like lemon sole, Barnsley chop or crown of English chicken. But before we even pick our meals, we’re brought the restaurant’s alternative to bread rolls Ã¢â‚¬â€œ huge cloche-hat shaped Yorkshire puddings stuffed with cheese and served with a sour cream dip.

It’s actually traditional for Yorkshire Puddings to be served as a starter. Poor families would fill up on them so they’d need less of a main course. Of course these ones are served in a refined setting and came with the cheesy twist but they were everything you’d want them to be Ã¢â‚¬â€œ crispy on the outside, fluffy in the middle and oozing with mustardy cheese.

Thankfully, I had room for my starter – black pudding and scallops, a traditional pairing, but cooked beautifully with a sweet slick of apple and celeriac puree marrying the flavours. T wolfed down his palm-sized Devonshire crab cake which had a chunky texture and a fiery chilli kick.

For our mains we picked a fillet steak and lemon sole along with triple-cooked truffle chips and roasted squash with chilli. The sole was soft and tender with a halo of delicate, herby sauce but the steak stole the show. The cow that it was made from was apparently fed two seasons of grass and heather. I don’t know if that’s why it was so delicious or if we just enjoyed it because we felt less guilty knowing the cow had frolicked around in a meadow like a bovine Heidi. Either way, it was butter-soft, with a deep flavour and boosted by beer and cider mustards and a smooth peppercorn sauce.

By the time we’d finished, we felt like we should be the subject of one of Gillray’s caricatures entitled’Greed’, depicting two rotund Londoners with ruddy cheeks and waistcoats bursting at the seams (not that we wear waistcoats).

Still, the desserts were too tempting. The Dorset Batter Pudding was a Yorkshire pudding (another one) but this time studded with sweet blueberries. The signature sherry trifle was a hefty jam jar layered with cream, vanilla custard, stewed red fruits and soft sponge. We were instructed to jab a long spoon through the layers then pour a glass of sherry inside, which was quickly glugged down by the sponge at the bottom. It was the best Ã¢â‚¬â€œ and most boozy Ã¢â‚¬â€œ trifle I’ve ever had. If you can’t manage it all, the waitress can pop the lid on so you can take it home.

Gilrays’ prices are at the higher end of the scale (a three-course meal without wine starts from around £50 and cocktails are around £12) but it’s worth it. Gillray’s might be named after someone with a sense of humour but the traditional, beautifully cooked food, fantastic view, relaxing stylish atmosphere and attentive staff are no laughing matter. I’ll be back.