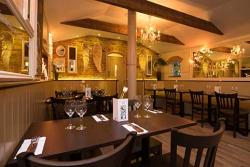 Opinion on the once unstoppable train that is the London burger trend is starting to divide. On one platform are those that stand strong in the bun fight, celebrating the MEATmissons and Lucky Chips of this world for making it okay, even trendy, to admit your dinner consisted soley of meat and bread.

They will tell you that the best are not just burgers, but superior burgers – made to a specified formula of mincing, mixing, compressing and caramelising formed through years of research (and that’s only the meat part, wait’til you get to the whole sweet brioche versus sourdough bun debate). They may also tell you that these’pioneers of the patty’ have made the London restaurant scene richer whilst (somewhat ironically) creating a cheaper way for mere mortals to get in on a gourmet food fad.

On the other side of the tracks you have your amuse-bouche-loving-purists who muttered in irritation at the trend when it started, tolerated it through pure outnumbering when it gained momentum, and are now gleefully waving adieu this so-called’dude food’ now it’s finally showing signs of pulling out of the station. They were the ones who asked why anyone would take a perfectly good steak (in most cases supplied by The Ginger Pig et al) and essentially pre-chew it for you. Why one would want the first bite of their meal to taste like their last. And how you could possible justify calling someone who is essentially doing the same job as a Macdonald’s employee a chef, much less a genius. To them no amount of waxing lyrical about a perfectly-judged-fat-to-meat-ratio will ever stop them asking’Why the fuss?’

It may be hard to believe but HachÃƒÂ© burgers have been around in our capital since 2004, meaning that founders Beresford and Suzie Casey were flipping patties before it even occurred to the London food world that burgers could be high end. They attribute their steady growth to remaining independent, with four sites across the capital today (the first in Camden was followed by a Chelsea in 2007, Clapham in 2012 and finally HachÃƒÂ© Shoreditch on Curtain Road in late February.

We paid the most recent outpost a visit on a miserable Wednesday evening (so vile that anyone in their right minds would have been at home in front of the telly with the central heating up full blast, swigging straight from a mid-priced bottle of red). Despite this, the restaurant was busting with pretty girls in ironic shoes and prettier boys hiding behind grown-up beards. The interior (particularly when you compare it to the nonchalantly derelict interiors of most other burger joints at the top of the heap) is really quite lovely – all the butterscotch walls, artfully placed mirrors and the kind of soft, chandeliered lighting one would find in a high-end fashion boutique. 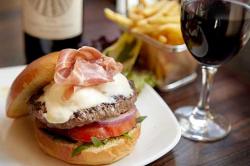 Having heard the team are burger purists, I was surprised to find the HachÃƒÂ© menu long and winding, starting with scotch beef steak burgers dressed up in just about any way you can think of (from the Canadian with sweet cure bacon and cheddar cheese to the Mexican with Cajun spices, salsa, guacamole, Jalapeno peppers and sour cream). There’s also a plethora of chicken, fish, duck and falafel options.

Presented with such a the vast list, it’s hard not to compare it with the pared down brilliance of Patty & Bun menu or Tommi’s Burger Joint, and that the comparison leaves it feeling a bit Gourmet Burger Kitchen formulaic.

Thankfully, everything we received from the kitchen was genuinely impressive. My classic HachÃƒÂ© cheeseburger Ã¢â‚¬â€œ a meaty crust of flavour with a blushing red centre Ã¢â‚¬â€œ was easily one of the best I’ve tried (and trust me when I say I’m no burger virgin) whilst somehow being totally different from those I’ve eaten in the past few years. My dining companion and I mulled over this fact whilst demolishing model-thin frites and gloriously puffed-up, deep-gold onion rings; and decided it must be something to do with it feeling more European than its Americanised counterparts. Seasoned the correct side of salty with a dense richness to the meat, these burgers may lack the infamous’five napkin’, filthiness to which we’ve become so accustomed in the past few years, but were none the poorer for it.

Now might be the time to admit that I’m a huge burger fan and have pretty much ceaselessly championed the whole junk food thing since it started its greasy assault on diners a few years back. But, as much as I love biting into a perfectly judged burger (which HachÃƒÂ©’s undoubtedly is), it’s impossible to deny that London is fast reaching saturation point.

Still, HachÃƒÂ© need not worry yet – if their busy restaurant is anything to go by, there are still plenty of people on platform one. And, when the burger train is finally derailed, they can hold their heads up as one of the first (not to mention best) to enter the station.