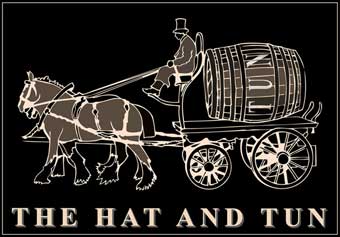 Bang off Clerkenwell’s Hatton Gardens at the Hat and Tun (Hatton Tun – punny, no?) is Ed and Tom Martin’s latest addition to their empire, a funny cross between Victorian East End boozer and English country pub.

So we have the ubiquitous dark, wood-panelled walls hosting haphazard stuffed pheasant, wild boar and badger heads. Then – on the counter – a jar of pickled eggs, a tureen of cauliflower soup, mushy peas in a vat. Above, classic Anaglypta wallpaper like the pubs of the 1950s. And on the menu, potted shrimps, Huntsman’s lunch, steak and ale pie.

The location is a perfect intersection of nearby Diamond Avenue, Hatton Garden and the chopsy charm of Smithfield Market and signs for both Hatton Wall and Saffron Hill are visible from the giant windows that let in much-needed light from the alleyway. There’s a good use of the pokey space; vast gilt-edged mirrors reflect gleaming, brassy, glassy fixtures that surround beaming staff.

Judging by the opening night, you would think the Hat and Tun was built for sturdy, English country stock, fresh from extracting their fingers from the bloodied jaws of a fox. Brothers Tom and Ed, whose statures dwarfed most – particularly my short one – cruised through a heaving crowd of bankers, lawyers and moneycrats – different to the one I witnessed a couple of days later at my lunch.

On this busy Friday lunchtime, I dozed for a moment on my ETM wine – Ed & Tom’s own blend – and saw through blurred eyelashes a Dickensian scene. Barrowboys made good in long wool tailcoats, duckers, divers, skivers… deals being struck over pints of Adnams… cleavages flashed by the woodburning fire… the tableau spoiled somewhat by Farringdon’s ubiquitous media workers.

As always, matey’s dinner was the better choice. His starter of pork pie and piccalilli proved a robust pie slice whose gamey insides were almost the texture of a smooth pate. The homemade picallili was rampant with tang and vegetable chunks – a good thing in this case.

My potted shrimps and toast – downgraded to bread that day – was a different affair. The shrimps were all clogged together fridge cold, butter runny at the top where it had been heated up quickly. What a load of butter – I struggled to locate the shrimps in the yellow grease.

I had Chicken and mushroom pie, mash and liquor for my main. My mash was a Mr Whippy whirl of the smoothest mash -school dinner-like so ideal for a pie ‘n’ mash shop. The crust was firm, with whole chicken pieces and mushrooms suspended in a slightly paste-like sauce. The liquor though (‘vile’ said matey) was truly the by-product of cooking, with most of the flavour leeched out.

The triple cooked sausages – made of shoulder, back and ham hock were lovely and herby though, tasty wigwam struts on the tent of mash. For dessert, my British cheese board: Stilton, goat’s cheese, brie and cheddar, with oatcakes and quince did the job, whilst matey’s chocolate pie was truly gooey. Open only in the week, the Hat and Tun already seemed to be doing a roaring trade. People were waiting to be seated or propped up at the bar waiting for a table. And the food came quickly apart from our dessert – for which the staff and chef profusely apologised.

We couldn’t complain about the huge and largely satisfying portions but gastropub it ain’t – it’s pub lunch nosh with efficient and friendly service in a quaint, décor’d setting. If you want practical cheery rather than fine dining, this at the moment works.