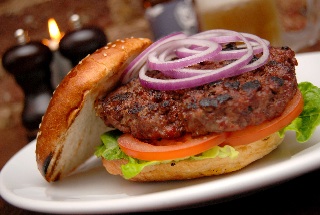 When is a burger not a burger? When it costs £15, that’s when. At that price it has moved away from the ‘all beef patty in a sesame seed bun’ meal of the masses and entered the higher realms of gastronomy.

The Hawksmoor Hamburger was apparently a labour of love for owners Huw Gott and Will Beckett and is now a burger to die for. Well the British Longhorn cattle did anyway. Not only did they surrender their beef, they also handed over their bone marrow, their clod and their sticking too. No I have no idea what those cuts are either, Google is your friend there.

It’s part of Hawksmoor’s nod to our cash-strapped times. A lunch special that won’t break the bank and presumably will attract in some of the poor employees of RBS around the corner as they struggle to survive without their thoroughly well deserved bonuses. How does one get by on just a six-figure salary? It’s a nightmare, obviously.

Hawksmoor opened in more positive times, when bankers were happy to pay top Dollar, or Yen, or Euro for the restaurant’s superior meats. Big, bloody steaks that fuelled a thousand hostile takeovers, interesting cuts, tasty chips, all served in a clean sharp environment and with a bar that deals in what I am told are some of the best cocktails in London. I can’t vouch for that, if I want a Slow Comfortable Screw Up Against The Wall I’ll have it round the back of the scout hut thanks very much.

The lager is good enough for me, especially when it comes in glasses so deliciously chilled you find your fingers glued to them. In the interests of science we forgo starters and go straight for the burgers. No one asks how we want them cooked, some places do and some places don’t, one has to assume at this price that the kitchen will get it right, which is of course crisply seared and sealed outside and pretty pink inside.

The plate appears a bit sparse when it arrives, plenty of porcelain visible around the big-bunned hefty burger. A few more of those attractive chips would cure that. The burger looks the business though, a demi brioche bun that has a soft texture but not so soft that it’s indistinguishable from the meat. Taking off the lid we can see the gherkin and tomato in there, as well the traditional leaf of superfluous lettuce, but I can’t see enough red onion, in fact I can’t see any so the picture above is a bit misleading. The important thing is that it looks possible to get the whole thing in the mouth for the first bite, which I do and shortly after experience the cheerful sensation of warm juices running down both my forearms.

It is without doubt a very superior burger, a burger meister in fact. I personally like my buns toasted, ooh err madam, as this seals the bun against absorbing too much juice too quickly, but this doesn’t affect my enjoyment of the taste which is rich and lush the result of excellent cooking and top quality meat. A nice slice of Somerset Oggleshield cheese tops it off, before slipping out. It’s a far cry from the clown’s patties and plastic slices down the road and the triple-cooked chips are crunchy outside, pillowy soft inside. The only problem is the one that affects all mega-burgers; once you put it down to grab a chip it’s enormously tricky to pick it up again as the contents start to slide about tectonically. You just have throw decorum to the winds and shove it in. I’m sorry about the napkin Hawksmoor, but the mess was inevitable.

Some people will argue about the merits of this burger versus ones they have had in New York’s finest, but that’s hardly relevant is it? We aren’t in America. What is relevant is that you probably won’t find a better burger on this side of the pond and almost certainly not in London. Is it worth £15? Almost. With a few more chips, and maybe a glass of wine or beer included in the price, it would be a perfect lunch deal. As it is, it is just very good indeed.