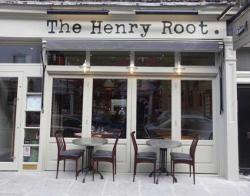 For those old enough to remember a crisp pound note, chances are you aimed it at the newsagent or window-cleaner rather than fritter its symbolism on a litany of celebrity dodderies. What am I on about? The Henry Root, of course. Apart from being a reasonably-priced, modern bistro in toffee-nosed Chelsea, Henry Root was a fictitious right-wing character fashioned by the reportedly left-wing womaniser, raconteur and satirist William Donaldson.

Donaldson, who lived on the same road as this restaurant, wrote copious letters to ministers and Michael Parkinson etc saluting the triumph of Thatcherism, often attaching a greenback in the envelope to help his addressees execute whatever madcap idea he suggested. His books of letters are hilarious, one of which – part of the bistro’s assortment of curios – I spent much of the evening Rooting though (how we laughed) myself.

However, the association with Donaldson stops there. The Henry Root, for all its quirky, and attractive, vintage décor – the Imperial typewriter, the black and white photo of actress Sarah Miles – is simply a decent, new-ish (opened in December 2010) locals’ restaurant and wine bar, minutes from the Fulham Road and an astounding throwback to the 1980s.

Apparently, it’s meant to be a take on the ’80s wine bar but the coiffeured blond boys, guffawing, and their skimpy-skirted female counterparts with international school accents are no irony-rocking Hoxtonites. No, here, in the heart of Henry Root land, image is destined to be forever ’80s Sloane Ranger with some glammy Middleton posse ladled in.

But this has little to do with the food. So, the place has an extensive wine list, bistro food classics and modern English favourites, all inoffensive crowd pleasers, except, perhaps the snails on toast which I found hard to stomach, particularly given the rapid skin-forming nature of the livid green parsley sauce – but perhaps that’s my own issue.

Head chef Sang Nguyen has done stints at The Orrery, Le Gavroche, Le Manoir aux Quat Saisons and Gordon Ramsay Maze Restaurant among others. And there were some lovely dishes on the menu, our favourite being the pickled mushrooms – sharp and jabby – on a deliciously creamy cauliflower puree on toast for £6.50. The menu splits into charcuterie, including an excellent ballotine of rabbit with prunes and ventreche [French bacon] porc noir; small dishes including some extremely buttery, though perfunctory, shrimps on toast for £9; and seared Merguez with braised lentils, which was fine.

Around four small dishes is just short of filling so we plumped for mains. T didn’t seem very enamoured of his aubergine, pepper and courgette tart with feta and olive dressing but that’s his fault for choosing something so dull-sounding. Tasted OK to me, nice Moroccan swish to it. I have no complaints about my roasted sea bass with cucumber and beetroot, tomato and lentil relish – and it should please the crowd – but it didn’t blow me away.

Must say, we were expecting the service to be a touch more solicitous, however, given other rave reviews, but the busy Friday evening we arrived, there seemed to be the unfortunate combo of few staff and a raucous Chelsea birthday party. We waited at least 15 minutes, if not longer, for our mains plates to be cleared away and went without being offered any wine for the whole main course. We chose to go without rather than trouble the staff, who, when we first arrived, had admittedly been most charming but then seemed to forget us.

Of course, it was a rambunctious night when we attended, and perhaps we weren’t local enough, or our shoulder chips too fat and greasy. But for the regulars, this seems a highly popular affair and given its location, well-priced in its offerings. Perhaps, however, the Henry Root will soon receive a crisp pound note to go towards some extra staff for our next visit.

By Foodepedia18 May 2011Restaurant Reviews