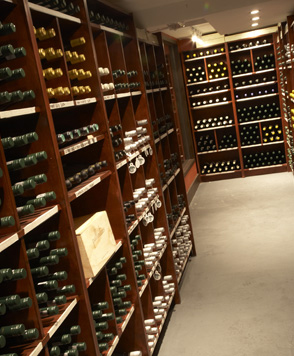 They’re big on wines at High Timber and keen to show off their cellar. I have to say that 48,000 bottles of wine isn’t exactly Disneyworld but it’s still a remarkable sight. The sheer volume of this wine cellar is explained by the fact that Gary and Kathy Jordan who own High Timber, also own a wine estate in South Africa’s winemaking region, Stellenbosch, and have brought their love of food and wine into one cool, slate-floored restaurant with great views across the river and a laid back feel.

In the kitchen is Justin Saunders who is matching modern European dishes with Harvester classics of steak and chips with onion rings, but more of that later. A seasonally rooted menu first gave us asparagus fresh from the Isle of Wight served simply, the stems still vibrant green and perfectly al dente. A properly sharp Hollandaise sauce was wobbling at one end and, as a bit of pizzazz, a poached egg in a Parmesan crust was perched at the other. The black slate it was all served on set off the colours well and it was a simply good dish. My only caveat being that the soft egg yolk was a surprisingly anemic yellow, although I can’t imagine that it was anything but a free-range egg. ‘I don’t normally like Sauvignon Blanc,’ grimaced Neleen the sommelier pouring a glass of Jordan, ‘but this is good.’ She wasn’t just bigging up the owners’ wines, it was good – herbaceous with a mineral finish that suited the ‘grass’.

Pan fried foie gras with a fig gallette was as good as is gets, what lifted the dish that extra notch was the seasonal forced rhubarb it was sat on, the blushing rhubarb adding a tannic edge that contrasted well with the unctuousness of the liver. The Paul Cluver Noble Late Harvest served with it had marvelous perfumed, floral notes with hints of ripe peaches and pineapple, the latter fruit really bonding with the foie gras.

Now I don’t much like Farmer Sharp, his meat stall at Borough Market always seems too expensive, even for its undoubted quality. Nonetheless High Timber is quite right to source their meat here and the selection of steaks is very good. Mine was properly rare, the downside being it was a bit cold by the time it got to table, but the well-aged meat was melting, the chips in a cute mini fry basket were crisp and well-salted and the onion rings actually rather tasty. I really don’t like being served food on wooden boards either though and the mushroom was meaty but curiously over-sweet as if sugared. They offer a range of sauces but I demurred, you don’t want to bugger about with a good steak and what’s more I had a remarkable Jordan Cobblers Hill 2000 to drink. This was just an awesome wine. It didn’t just fill the mouth; it overflowed it with dark flavours, balanced tannins and licorice/chocolate complexity. As promised it also went well with the excellent roasted monkfish with ‘soused’ fennel, brandade and a monk’s beard tempura whcih showed Chef’s skills away from the griddle and deep fryer. The monk’s beard is better known of course as Barba di Frate, a seasonal Tuscan treat that has a pleasant bitterness. I’ve never seen it tempura’d before but it worked. Okay there was foam on the plate, which I never liked even when it was trendy to do so, but it was with a generous and well-cooked and seasoned bit of fish with well balanced accompaniments.

For some reason I didn’t expect much from dessert and yet it was actually a pleasant surprise. My Bitter orange cannelloni, passion fruit mousse and caramelized pineapple was beautifully laid out with a long fat ‘line’ of what seemed to be sugar infused with ginger leading up to a good scoop of ice cream. Chocolate tart with a salad of blood orange and blood orange ice cream was equally impressive. This time I had the Paul Cluver while the wife had Jordan Millifera, a name inspired by the Cape honey bees at the vineyard, a late harvest, noble rot Riesling honeyed (as you might expect) but with a fresh acidity.

The restaurant was busy and apparently has been so since opening, with local suits finding it just right for non-showy business lunches and connoisseurs coming in for the food, the view and that remarkable wine cellar. Unpretentious, modern, well-priced and friendly, this place is just what London, or at least this particular reporter, wants right now.