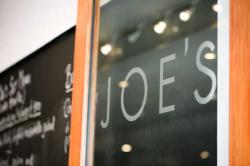 Banksy started stencilling his stuff on walls in East London, but now his japes have come all the way West to South Kensington’s Walton Street, where the very people he presumably despises can pick up an example for a mere £60,00 or so.

The joke is not going to be on them though because, unless some kind of sanity breaks out in the art world, they’ll be able to resell the work in a few years time for double the price. Banksy is in fact helping rich people get even richer.

Musing on that particular irony I swung into Joe’s located next door in Draycott Avenue. Here chef Maria Ella is in charge, herself like Banksy a refugee from the Wild East. Her stint as chef at the Whitechapel Art Gallery was greeted with effusive cries of love from diners and now here she is at Joe’s.

Joseph is of course the rather expensive clothes shop chain and Joe’s is the name of the store’s restaurant here in Draycott Avenue.

Like Banksy it’s all a bit ironic. Joe’s sounds like a cheap cafe but with its glam interior, complete with glossy style mags to read if a table isn’t free, it’s anything but. Outside I see a Lamborghini, which has probably never ever left Zone 2, attempting to parallel park. It takes him ten attempts while taxis hoot at him derisively.

The rich have to eat too, and they want to eat well at lunch. They don’t often care what they eat, but here at Joe’s they’re getting better than they perhaps expect or deserve. In fact the dishes coming out would be perfectly at home in a ‘proper’ restaurant.

I like the carta di musica a lot; posh Pringles and saltylicious it makes me drink more of the San Pellegrino water which, as water goes, does actually taste like it’s worth paying for. With some waters you imagine the factory is simply centred around a tap on the local mains. 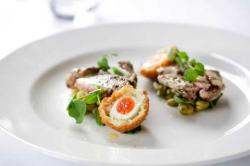 A starter of quail looks a bit like the women out in the street; not a lot of meat on it but beautifully dressed. Of course quail is quality not quantity and this is trophy wife stuff. Cooked a bit rarer than I like it, but seared well on the outside to give it that extra flavour kick. A quail Scotch egg, a posh take on the egg that’s in fashion right now, sits bisected beside it with cod brandade and what I assume are broad beans scattered around.

I say ‘assume’ because broad beans, once sexily liberated from their silver overcoats, are normally a brilliant emerald green and these are more camouflage green. Ok if you’re painting your Airfix Lancaster bomber but a bit flat on the plate. Apart from that it’s a stylish dish that tastes better than it looks and it looks pretty good.

Carrots, red lentils, herbs and tahini yoghurt is a rocking veggie dish, the small carrots piled up like tapered logs on a mounded zesty mix of herbs and lentils. A dish with real flavours for vegetarians and not the usual compromise. Chef clearly cares.

I’ve had some legendary Porchettas in my time, that fatty, moist Swiss roll of pork with its layers of stuffing is rarely bad, often brilliant. It’s a staple in restaurants in Italy and a beast of a dish, not one for slimmers, but immensely satisfying. 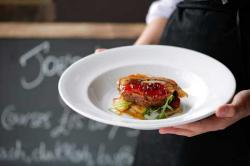 Joe’s is just right, the fat is all there but it dissolves like morning dew on the tongue, the herbs have kept their freshness and the meat is tender and alive with flavour. A big, perhaps too big dollop of peach and rosemary jelly cuts through and rosemary roast potatoes are perfect,

I like the look of S’s pan-fried monkfish, smoked aubergine puree, chorizo and chickpeas. Okay adding chorizo to fish is commonplace, but the day it stops being a perfect marriage Rebecca Brooks will be made editor of the Guardian. As a catwalk dish it’s a head turner, it looks great and apparently it is.

Also beautiful is a dessert of Lavender marshmallow, chocolate sponge and mascarpone ice cream. A bouquet of vibrant colours with each item placed on the plate with watchmaker precision. The lavender reminds me of that classic old sweet Parma Violets and the mascarpone ice cream has a texture that is almost gritty, but in a good way. They could probably open just to sell such desserts and they’d have queues out the door.

Joe’s may be the ‘shop restaurant’ but it’s anything but High Street stuff. Maria Ella is delivering really interesting, fresh food at prices that are surprisingly off the peg. Invest in a meal there before, like Banksy, she enters a more expensive market.