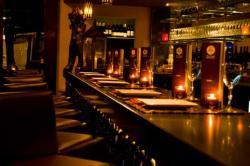 Have you ever heard the story about the man from Bangkok who, while travelling through Europe, spent some time in Seville? Inspired by the locals’ habit of eating small plates of food called tapas, he decided to move to the south coast of England and open a restaurant combining the culinary traditions of his native Thailand and those he encountered in Spain. Thus, Thai tapas was born.

No? Neither have I because I made that story up (I know, get me a book contract). There is a truthful element to this tale though, and that is the presence of not one, but two Thai tapas restaurants on the English Riviera. The original Koh Thai Tapas is in Boscombe and its younger sibling is just up the road in Bournemouth.

By that sarky introduction you might think I’m going to launch into some sort of foodie rant about what a naff idea Thai tapas is, but actually, I’m not. Everyone is doing the small plate thing these days, so why shouldn’t the Thais get in on the action. And if the food is good and the price is right, who gives a stuff what ‘concept’ the marketing man has come up with?

By all accounts the locals are enjoying their ‘Thai tapas”, so I made the journey down to Bournemouth, braving the stag parties, the English ‘summer’ weather, and the possibility of being swept off the pier and down to Davy Jones’s locker, in order to see what the fuss is about.

The Bournemouth outpost occupies a site up the hill and slightly away from the cheap neon thrills of the seafront. Inside, the lighting is romantic and the decor a mixture of dark wood and off the shelf Thai-style sculptures. But, despite being a large space, it is inviting enough and as a bonus there’s a nice bar, where you can perch for a couple of pre-prandial drinks and have the barman
congratulate you on your choice of beer.

Sitting down I was intrigued to see how the Thai tapas idea manifested itself: confusingly the menu seemed to be rather straight forward. Admittedly, what would have been labelled starters elsewhere were called tapas here and the curries were available in a slightly smaller portion for a couple of quid less, but something seemed to have got lost in-between the marketing man and the chef.Ã¢â‚¬Â¯

There is an option on the menu whereby you can choose how much to spend between £18 and £25 and they will bring you a selection of food based on your instructions, i.e. mild, spicy, no seafood etc. On the waitress’s recommendation we went for this: it seems like a good way to test the ambition of those behind the stoves, and also meant the girlfriend couldn’t do her usual trick of keeping the waiter hanging around for ten minutes while she works out which menu item will mean the biggest portion. Ã¢â‚¬Â¯Ã¢â‚¬Â¯

To kick things off there were plates of chicken satay, grilled pork, ‘tempura’ prawns and dim sum. We’ll forget for the moment that dim sum are Chinese, that tempura is a Japanese method of cooking in batter and not breadcrumbs, and concentrate on what they tasted like.Ã¢â‚¬Â¯

You know what, I wasn’t disappointed: the breaded prawns were tasty; the dim sum could have happily graced the table of a well-to-do Hong Kong businessman; and the satay and grilled pork were straight up, no messing about, tasty. The pork especially so; slightly sweet, spicy and as tender as a Thai bride’s bosom.Ã¢â‚¬Â¯

Our mains arrived in the form of a pad thai, green curry with chicken, something called boozy duck, rice and intriguingly, a bowl of roasted new potatoes, which we’ll return to in a minute. I was slightly disappointed with this selection, green curry and pad thai are fairly standard offerings and seeing as though we were by the seaside I had hoped for a crispy fried seabass to chow down on.Ã¢â‚¬Â¯

However, they were both pleasant enough: the pad thai was as about as good as you’ll find in most Thai restaurants; although the green curry lacked a bit of depth, especially that hint of sourness which is so important in Thai cuisine. The boozy duck, a tongue numbingly hot stir fry of duck, basil, bamboo shoots and chilli was certainly the best of the bunch and almost transported me back to my first sweaty night in Bangkok, when I was struck dumb by a fearsomeÃ¢â‚¬Â¯yam neuaÃ¢â‚¬Â¯(Thai beef salad).

This then leaves us with the potatoes. I consulted the menu again and couldn’t even see them listed. The only dish to feature spuds was a massaman lamb curry, so maybe they just forgot the rest of ingredients?

This is a puzzle I’ve been racking my brain on ever since, and finally had my eureka moment yesterday morning in the shower. The Thais are a famously hospitable people and so, realising that my girlfriend is Irish, they knew she wouldn’t be able to enjoy the meal without her daily portion of potatoes. Voila, case closed.Ã¢â‚¬Â¯

Despite those spuds, VD was still hungry and managed to demolish a decent banoffee pie for dessert, bringing our first Thai tapas experience to a close.

There are a few elements here which will get the foodie purists hot under the collar and also a lack of really authentic Thai dishes on the menu – no som tam, no larb gai etc. But when the food is enjoyable, the atmosphere buzzy, the prices reasonable (you could easily eat well for £25 a head), and the service pleasant, I’m not going to be one of them.

p.s. Subsequent investigations show that the potatoes were actually on the menu as a special, so just a one-off for us!