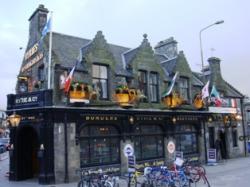 La Stazione is an Italian osteria/trattoria. It is sat immediately above Ryries Bar, an old Scottish pub that has been in operation since the 1860s, in a building that dates back to the 1749. Ryries, and of course La Stazione are just a stone’s throw from Edinburgh’s Haymarket Station – hence the name of the restaurant – and a short walk from Princes Street, arguably Edinburgh’s main shopping street. The restaurant itself is quite an intimate space with the prospect of some 30 or so covers and it has a homely feel about it, a little like eating in a friend’s front room.

We were seated at our table and it was immediately like being among friends, we were given a menu and soon after, the owner of the business came over and discussed what we might like, explaining that they are always willing to go ‘off menu’ if there is something that we might particularly like. We went with the flow, and allowed him to suggest items for us. This may or may not have been our best decision as we ended up with a substantial amount of food coming to our table, but it was tasty and we got to try a number of dishes that we wouldn’t have otherwise done.

As a sort of pre-starter we were brought a foccacia pizza base that was scattered with rocket, parmesan and balsamic vinegar, the base was light and crisp, the toppings set it off well and although we tried not to eat the whole thing, as we knew there was a lot to come, it was hard to resist. Then followed ‘starters’ – a quadruplet of pasta dishes. This made our eyes pop when we saw it. In the centre of this plate of food was a small lasagne, which we understand was completely home-made, including the pasta and it was very good, lots of meaty tomato sauce and cheese, with just enough of the pasta. The lasagne was surrounded by three other dishes, spaghetti and meatballs, tagliatelli with home-made pesto, penne with mushrooms and cream. We understand that these pasta were bought in, but the sauces are made on the premises and they were good, all three of these dishes perfectly cooked.

For mains, the Pollo Cacciatore, chicken breast cooked in a tomato sauce with diced vegetables, and pan fried sea bass fillet. The chicken in the cacciatore was tender and well cooked, supported perfectly by its accompanying sauce to make a tasty dish. The sea bass was a simple dish, the fish, again cooked well, was in a pool of lighter tomato sauce and was accompanied by some pan roasted cherry tomatoes, another good plate of food. We were brought sides of chips and salad but we barely touched them, we were quite full.

To round the meal off we were encouraged to try the tiramisu, made on the premises, which we did and it was very good, light and creamy with a great coffee/alcohol kick, we were pleased we yielded to the suggestion.

La Stazione have house wines by the glass at £3.50 and their bottles start at just under £12, we had the Sangiovese which was very palatable. Service was, as mentioned above friendly, but efficient. La Stazione is a good local eatery, while there we noticed a number of tables occupied by tourists, like us, but it seemed clear that there were a good number of local customers, it is a popular place and rightly so.