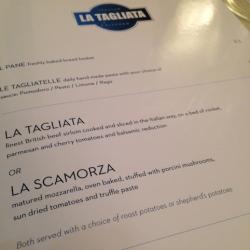 Chains, the scourge of the modern day foodie and local business crusader. Love them, loathe them, be indifferent about them; the reason they exist is that people crave consistency, usually at the lowest possible price.

Success for a restaurant is generally dependent on becoming synonymous with a dish, a style, a cuisine, a theme, an ethos, a standard of service – something of recognisable worth and quality that appeals to customers. Jumping from pulled pork one minute to apple fried duck livers the next, while asking customers to wear their favourite hat or bring their own wine, is only going to cause confusion and dilute a restaurant’s appeal. 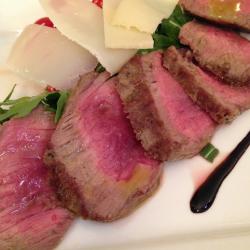 Some restaurants have taken this philosophy to an extreme – serving only a single dish. It’s a brave decision; anyone who nails their colours to a particular mask had better know what they’re doing. Thankfully, La Tagliata – a small Italian restaurant that calls the rabbit warrens between Liverpool Street and Spitalfields Market home – does, at least where their main course is concerned.

La tagliata, the Italian dish after which the restaurant is named, is a sirloin steak, seared, sliced and served on a bed of rocket, with a pot of potatoes on the side. Pink, tender, perfect, the meat melted on the tongue and the sweet shepherd’s potatoes were a creamy, delicate accompaniment. For reasons only known to the chef, his or her name was signed in a balsamic reduction in the corner of the oblong plate – a style of presentation that went out way before the last government. 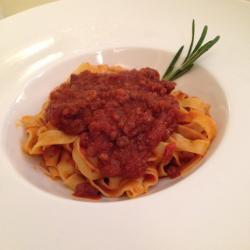 La Tagliata offer a primo course too – tagliatelle, served with one of four sauces. It’s a delight to eat something so simple, so brilliantly cooked, so tasty and so totally void of pretension. We sampled both the limone and the ragÃƒÂº. I’m sure the pomodoro and pesto options are equally good. 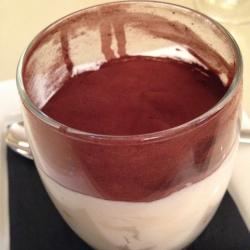 Charge £24 for both of these courses and you’re on to a winner. I’m sure it’s a price that the local bankers are willing to pay at lunch, it’s definitely a price I’m willing to pay for dinner. For an extra £5 you can add a dessert and that’s where I’d stop with La Tagliata. Steak and tagliatelle, absolutely the mast to nail the colours too, a tasteless bowl of cream for a tiramisu and a bizarre lattice of orange syrup across a lump of panna cotta, is not.

The other gripes revolve around cold air through a drafty door, equally cold plates (why? why?! It’s not that hard to warm them up!) and a house white with a somewhat Lambrini taste to it.

This is slight nitpicking though for a restaurant that delivers on the course it wants to be remembered for. The locals love steak and they love it bleeding, and in these frugal times, a £25 lunch of medium-rare red meat and sweet, saucy carbohydrate is going to hit the spot.