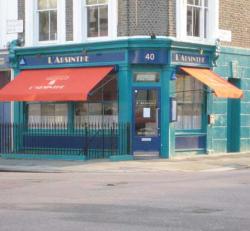 Leave Chalk Farm station, cross over the railway bridge and you leave lovely multiculti London behind; the Primrose Hill area is a monoculture.

A French restaurant here is perfectly sited; the ancestors of the people living here discovered France in the 1970s and loved it. While the working class flew with Freddie Laker to the Costas, the new liberal media class took their robust Volvos (they supported British car workers, but it was no use pretending the cars they made were actually any good) onto the ferry and drove down to holiday homes in the Dordogne.

In August you’d have found half the BBC there, along with bien pensant columnists from the broadsheets, all trying to finish their first novels about a person who worked for the BBC or on a broadsheet. They’d take a new wicker basket to the local market to pick up some cheese,’from a lovely little man’ who charged them double what he charged everybody else, and it was still insanely cheap.

Today the euro has put paid to the buying power the Brits once enjoyed in France and the little man gets his cheese from the hypermarche like everybody else. The Brits search high and low for a local bistro doing a set lunch for under a tenner and when they do they find that the chef is an ex-builder from Macclesfield.

So Absinthe is perfect for them and for me too, hoary old Francophile that I am. It looks the part, in a rather stylised way, and the friendly chap who opens the door has an accent to rival Inspector Clouseau’s. In a tiny space tasty dishes materialise through a hatch in the wall and it’s actually a lot better bistro food than you’ll find in most places outside of Paris or Lyon(s), rural France having largely chucked the culinary towel in.

Onion soup is thick and abyss-dark, the onions deeply caramelised by slow cooking, and the stock as beefy as a French prop forward. On top a slice of bread tries to float, its cargo of melted cheese threatening to make it turn turtle and sink. It’s hot and satisfying and filling, and so unfashionable it should be wearing flares. Lovely.

A game terrine with toasted bread is set off by a few daft fronds of lola rosa splashed with what looks like seafood sauce, but the terrine is very good. The meat inside is in various paysan lumps so the texture remains interesting for each bite. The grainy mustard on the side is superfluous and indeed would kill the flavour if used. I wouldn’t have turned down a cornichon though; I do like a nice cornichon as the vinegar cuts the fattiness.

Duck confit is always good. Taken from its jar of fat where it has been Gallicly brooding and biding its time and getting even more delicious, the duck leg needs only its skin crisping and its meat reheating before being served under a reduced sauce. And that’s what it gets. I happily tear every last sliver from the bone. Savoy cabbage has been lightly steamed or boiled, and then finished with a glaze of butter, while tiny onions roll cheerfully about the plate all cooked to a rich sweetness. I could have gone some potatoes on the side, perhaps Lyonnais, but perhaps best not given my waistline issues

Fish of the day is a fillet simply fried golden and crispy and plonked on top of softened Mediterranean vegetables. It looks sunny and fresh and tastes that way too, or so L says, I don’t try any of her dish as mixing fish with duck would feel like some terrible genetic experiment.

I’m not so enamoured with my tarte tatin; the apples too largely lumped, and soaked rather than sticky, with the pastry slightly undercooked.  Obviously doing the classic’thin sliced apples in a fan thing’ is time-consuming and this is a local restaurant but it’s a shame. L’s chocolate mousse is thick and tasty and just the thing after her relatively light fish dish.

The place is packed this lunchtime, there’s even a baby enjoying his meal, and the whole restaurant radiates the kind of happiness you get when there’s good honest food on the table, and nothing more taxing planned for the afternoon than some light Facebooking and Tweeting until nanny brings Oliver and Pertinella back from the school run.

They already have it good in Primrose Hill in their lovely ivory postcode, that they should also have such an excellent, well-priced, bistro is just another small injustice that life likes to challenge me with. Returning to Sarf Lundun and its grunting monsters, I felt that Absinthe had at least made my heart grow a little bit fonder.