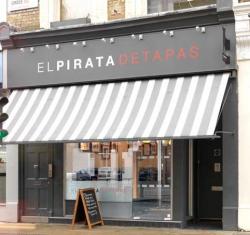 Lately, the tantric allure of the tannic has been hard to resist, particularly as Christmas releases its boozy breath on us all. The austerity/luxury season is too much of a disingenuous head-muck; easier, surely, to contemplate festivities with a nice cup of tea?

I reviewed the excellent El Pirata Detapas a few years ago when it opened and was keen to return, both to see how the food had progressed but particularly because – for a month until December 21 – it is eschewing the whisky/wine/yawn pairings that other restaurants excel at and is experimenting instead with quite a whacking whale of an idea: Tea and tapas. It sounds wrong but if you’re not drinking alcohol, it can enhance your concentration on the food and really work.

Miguel Angel, head chef at El Pirata Detapas, has worked closely with Lalani & Co. the boutique tea trading company to select rare teas from India and Nepal to match the tapas on the menu. The Spring reserve from the LaKyrsiew Garden comes first to awaken the palette, followed by the Silverleaf Green from the LaKyrsiew Garden which is matched with scallops and mandarins. The last tea, 1st Flush Jade Oolong from the Jun Chiyabari Garden is served with langoustine risotto and Serrano ham croquettes.

Overall, the tea and tapas pairings worked well and were intelligently calculated. We started mild and worked up so the final two courses were more traditionally punchy. All the dishes were served at room temperature to maximise the flavours.

I speak without judgment when I say the food was mostly a white puree, mild, tepid, crafted, unchallenging, not like the robust and heady flavours you come to expect from Spanish tapas. But it had to be that way to dovetail with the gentleness of the tea.

On a Thursday night, the place was packed with mainly locals, Spanish-sounding people and well-groomed couples in their 30s. It’s a chic place, more chi chi than its rowdier Mayfair counterpart. This one’s spotlights, oak flooring, oxblood walls and wood sculptures tamp down the atmosphere to very Westbourne Grove.

The teas are served with each course and come with a short introduction and an egg-timer so we could let them infuse for the correct time. There were also only served between 60 to 80 degrees so as not to impair the flavour Ã¢â‚¬â€œ the idea is to appreciate them like wine, for instance, when and where they were picked, whether it was the first flush etc.

The first, Spring reserve 2011 tea (15kg), LaKyrsiew Garden appeared like a rose wine, and was herbal, leafy and fresh, making quite a good palate cleanser. 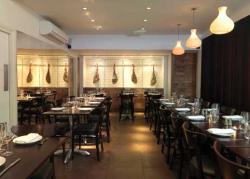 The starters didn’t come with a tea pairing. Seared tuna was beautifully rare inside and steeped in ajo blanco which is an emulsion made from olive oil, marinated almonds and garlic, yielding a slighty gritted and nutty non-directional white soup.

Prawn tartare with egg yolk citrus sauce was a fantastic mound of fresh prawn binded by egg yolk. However, the eggy flavour was a little too present and on the border of claggy and the delicacy of this dish did not need the haranguing tart of the tartare sauce.

But the roasted fig with cheese foam and crispy ham were cute, crystallised and a good sweet foil to the other two savours.

The Silverleaf Green, 16th November 2011 (13kg), LaKyrsiew Garden went excellently with the main course. Its woody bite and green sap undertones undercut what could have proven a slight banality of cream. However, with the tea to gird the tongue, the pairing worked.

As a main, we had fresh cod with pil-pil sauce and seared scallops, cauliflower puree and grilled mandarins. The scallops were cooked nicely and it was an ambitious attempt, the bitterness of the seared mandarins breaking the oil and cream of the pil pil sauce Ã¢â‚¬â€œ which, incidentally, is like a white sauce but made from the gelatinised head and tail of the cod and olive oil Ã¢â‚¬â€œ a little like an aoli.

The 1st Flush Jade Oolong, April 2012 (10kg), Jun Chiyabari Garden was strong enough to stand up to the more familiar strong flavour of these tapas although served alone, we figured it wasn’t as good as the previous teas.

However, this strong Oolong primed the palate for the robustness of the risotto; the second main of langoustine and ceps risotto with Idiazabal cheese emulsion was a stronger taste and S said the silver leaf green tea really brought out its flavour, for a flash accentuating the tastes of the risotto in the mouth. However, the Serrano ham croquettes were a little heavy and gloopy by this stage of the meal.

By the end of dinner, I must admit I was hankering not only for coffee, but for some raucous flavour. So the ganache of white chocolate, jelly mint & cookie dash felt right, a superb, creamy emulsion in a cocktail glass spiked with childish coloured baubles such as raspberries, blueberries and globs of mint jelly. We may be a nation of tea-drinkers but you’ve got to draw the line somewhere.

The Tea & Tapas pairing evening will be available at the restaurant for dinner only until Friday 21st December at £39 per person but check on booking.