Sweden’s Faviken Magasinet is one of those venues worthy of pilgrimage for many a philosophical foodie. The’New Nordic’ 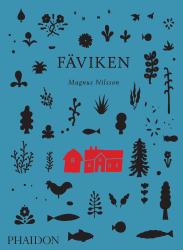 label may be simultaneously reviled and revered, but, following the doctrine it describes, Magnus Nilsson is committed to showcasing hyper-local, hyper-seasonal produce in a stripped-back, almost austere manner. It doesn’t make for an overtly festive book proposition, but there’s something supremely celebratory about simply letting good ingredients shine.

And, with its icy blue cover dotted with silhouettes of reindeer, barns and pine trees,’Faviken‘ certainly looks the part. It’s certainly not a gift for the cook who’s seduced by homely, haphazard layer cakes or simple, one-pot meals. But wrap it up for the gastronome who enjoys a spot of chin-stroking, and they’ll be in your life forever. Weighty in both the physical and intellectual senses, the book is a suitably restrained feast of textured photography, incredibly detailed methodology and Magnus’ manifestos.

‘Whimsical yet macabre’ accurately surmises the content of’Faviken‘. There seems to be a fascination with the juxtaposition of life and death, the gruesome and the gorgeous, the raw and the cooked- all which translate to a lexicon of compelling culinary concepts. Food is hunted, farmed and foraged on the restaurant’s doorstep, either used immediately or pickled, potted or preserved as appropriate. Although the cooking is complex, new-fangled wizardry is eschewed for traditional, earthy methods.

You could, essentially, replicate the diminutive restaurant in your own home over the Christmas period, when it’s likely you’ll have a hungry dozen lying around- quite literally- on several dark nights. Faviken Magasinet offers a no-choice menu, and the book offers the home-chef the chance to wax as lyrical about their’tiny slice of top blade from a retired dairy cow, crispy reindeer lichen, fermented green gooseberries, fennel salt’ as Magnus himself. Granted, you might not have ready access to the beasts’ CV, but you’ll still have something pretty tasty.

When recipes run to several prose-dense pages, you might worry there’s a lack of cook-able grub- to whit;’monkfish grilled over burning birch, a leaf of kale steamed so briefly it is dying on the place, green juniper and alcohol vinegar’… But although’Faviken‘ would pretty up a coffee table, it’ll also serve time by the stovetop. For all the pontificating and proselytising, the themes underpinning Magnus’ cooking forms the eminently sensible doctrine of many a foodie- allowing fresh seasonal ingredients to sing, preserving surplus to savour in leaner times, and cooking simply and smartly.

And, on the odd winter’s afternoon, there’s room for a spot of knitting ones own muesli. A post-festive slump often calls for a period of hibernation, during which you’d do just as well to festoon your kitchen and abused gut with home-made yogurt, bread, porridge, fruit vinegars, pickles and preserves rather than reach the tawdry depths of the Christmas biscuit barrel. A worthy diet, perhaps, but a well-earned one which satisfies both body and sense of smugness- especially when a dram of silky sour cream liqueur is taken from time to time.